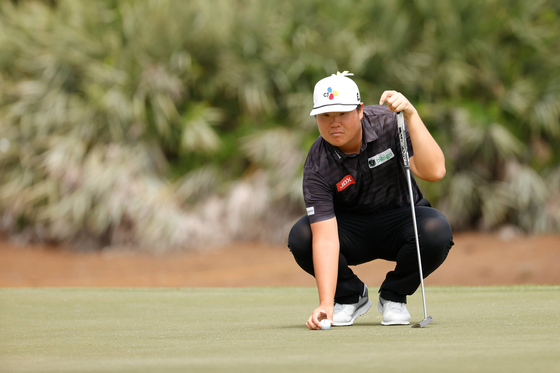 Im Sung-jae lines up a putt on the third green during the final round of The Honda Classic at PGA National Champion course on Sunday in Palm Beach Gardens, Florida. [GETTY IMAGES/YONHAP]


Im Sung-jae failed to defend his title at The Honda Classic over the weekend, ending the tournament tied for eighth for his third Top 10 finish this season.

Although Im was unable to repeat last year's success, when he picked up his first PGA Tour victory at The Honda, Im still walked away with a strong eighth place finish at five under par, 275, and $190,750 from the prize pot.

First place was taken by Matt Jones of Australia, who led the field with a dominant 12 under par, 268, putting him five points clear of second-place Brandon Hagy of the United States. Jones shot nine under par with a bogey-free round on the first day of the tournament, and then rode that lead for the following three rounds.

Im started the tournament hitting two-under par 68 on both Thursday and Friday, before inching up to one under on Saturday and par on Sunday.

Although Im started strong and then leveled off into the weekend, he slowly climbed the leaderboard throughout the tournament as the dominant early performances, including from Jones and Hagy, began to even out over the weekend.

Im, the highest-ranked Asian golfer on the Tour at No. 16 on the FedEx Cup ranking, also ranks at No. 14 on the PGA official money ranking, with just over $2.5 million earned already this season.

Im was the only of the six Koreans competing at The Honda Classic to make the cut.

The PGA Tour will hold an alternate event next week, the Puntacana Championship in Punta Cana, Dominican Republic, with Bae Sang-moon expected to compete from Korea.

Higher-ranked PGA players will instead be heading to the World Golf Championships-Dell Technologies Match Play in Austin, Texas, where Im will be making his debut after last year's event was canceled. Kim Si-woo will also return to the match play for the fourth time in his career.