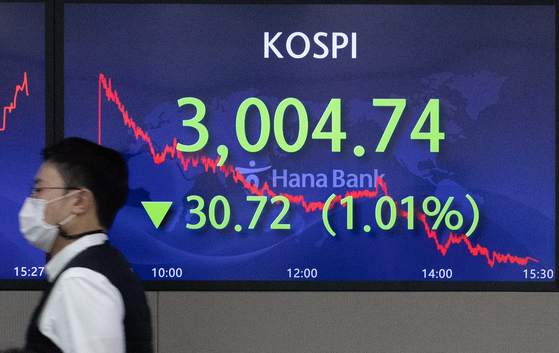 A screen in Hana Bank's trading room in central Seoul shows the Kospi closing at 3,004.74 points on Tuesday, down 30.72 points, or 1.01 percent from the previous trading day. [NEWS1]


Stocks slumped for the third consecutive session Tuesday amid uncertainties related to the longer-term U.S. Treasury yields and U.S.-China political ties. The won fell against the dollar.

The Kospi got off to a strong start on overnight tech gains on Wall Street, briefly touching the 3,058.79-point ceiling, as the 10-year U.S. Treasury yields subsided below 1.7 percent.

Stocks deepened losses following the news reports that the U.S., Canada, European Union and Britain launched sanctions against officials in China in protest of the communist state's alleged abuses in Xinjiang, western China.

AhnLab, a software company founded by Ahn Cheol-soo of the People’s Party, plunged 15.37 percent to 63,300 won after the news that Oh Se-hoon of the main opposition People Power Party beat Ahn and became the single opposition candidate for next month's Seoul mayoral by-election.

The local currency closed at 1,129.7 won against the dollar, up 1.3 won from the previous session's close.