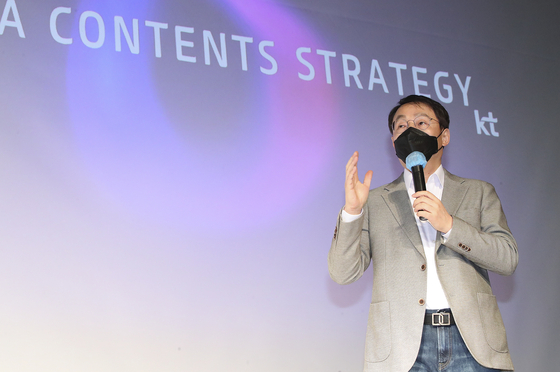 Telecommunications company KT is wading into the content creation business, with a plan to create more than 100 original drama series by the end of 2023.

KT says it intends to secure a catalogue of 1,000-or-so stories that can be developed into video content, like films or TV shows.

The company did not disclose exactly how much it plans to spend on content creation, but CEO Ku Hyeon-mo hinted during a press conference Tuesday that the plan at the moment is “bigger than any previous content investment plan shared by local competitors.”

Tving, an over-the top (OTT) service run by CJ ENM, for example, recently said it will invest 400 billion won ($354 million) on original content for the next three years. Wavve, run by KT’s rival SK Telecom, announced in 2019 it would invest 300 billion won for the same purpose by 2023.

The drive to push content creation is part of a long-term initiative to increase the portion of KT’s non-telecommunication business.

Spearheading this change is Ku. After taking the CEO position, he shared the goal last year that KT would generate 50 percent of its revenue outside the telecoms business by 2025, from around 35 percent last year.

“We’re transforming into a digital platform company and if there’s one platform KT can be big in, it’s media,” he said. “And to boost growth for our media platform, we need content. It’s time we get serious about investing in original work.”

From this year, a new subsidiary KT Studio Genie will oversee all content creation projects within the group.

At Tuesday’s press event, KT expressed confidence that it has the right team to turn a profit in the content business in a short period, without having to worry about spending years accumulating losses as it builds up a following.

KT already has most of the companies in place to take shows the whole way from idea to TV screen: Storywiz will provide stories and Studio Genie will be able to turn them into video content. This work will then be distributed on Skylife’s cable channel, Olleh TV’s internet video service and the Seezn OTT to constantly generate viewership and revenue.

The company owns data on media consumption patterns from more than 13 million customers that reveals their preferences in detail, like analyzing which scene in a TV episode had the largest viewership and when viewers changed the channel the most. Using it, KT developed a model that could predict the success of video content.

Korea-made content, including drama series and variety shows, have been successful in other Asian markets and that potential has already been recognized by many competitors, including Netflix, which pledged to invest a whopping 560 billion won in Korean content in 2021.

Another strong global contender to enter Korea this year is Disney+. Kang Kook-hyun, KT's senior vice president in charge of customer business, said he is in "active talks" with its Asian head. Korean mobile carriers are currently discussing partnerships with the global OTT.

"We don't really see Disney as a direct competitor," he added. "The direction of our content business is an open partnership. We may invest in content together while Disney may be willing to distribute Studio Genie's work overseas."

“It’s true that the heightened interest of global OTTs in Korea is working in favor of local studios,” said Kim Chul-yeon, the new CEO of KT Studio Genie. “But at the same time, there are also voices of concern that this may solidify a structure where Korean production houses are treated as subcontractors vulnerable to global firms’ dominance.”

Small and mid-sized local production houses are KT’s partnership targets for content creation, said Kim. After spending most of her career in CJ ENM, the CEO joined the telecom company in March.

Contrary to the widespread practice where production houses are only given a cut of the revenue when shows are first aired, KT will also share intellectual property rights that help production companies make money in the long term. And instead of restricting original content to KT’s own platforms, KT Genie Studio will ensure their partners’ work is played on other services as well.