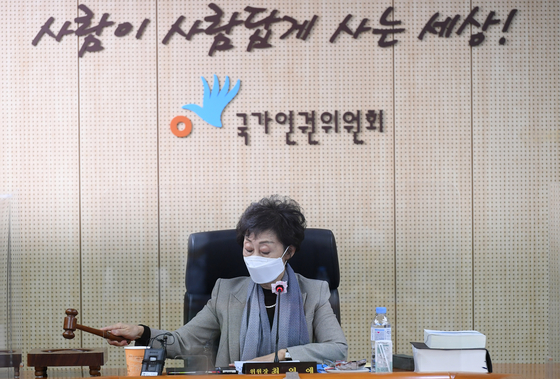 Choi Young-ae, chair of the National Human Rights Commission of Korea, oversees a meeting earlier in the month at the commission's headquarters in central Seoul in January. [NEWS1]

The National Human Rights Commission of Korea told local governments not to force foreign workers to be tested for Covid-19, calling such measures racially discriminatory.

“The nationality of a person does not play a factor in the possibility of the person getting infected with Covid-19,” the commission said in a statement Monday. “Yet some local governments have issued directives specifically for foreign workers to be tested for Covid-19 […] The commission found these directives irrational and discriminatory towards foreigners, and ones that ought to be stopped immediately.”

This month, local governments including Seoul and Gyeonggi issued mandates to foreign workers living in their borders to be tested for Covid-19. The measures were criticized by health experts, ambassadors and foreign chambers of commerce for being discriminatory to foreigners.

Last Friday, a group of ambassadors submitted a demarche to Korea’s Ministry of Foreign Affairs protesting the directives by local governments.

“Today, a delegation representing the Ambassadors of the European Union, the 27 Member States of the European Union, as well as the Ambassadors of Norway, Switzerland and the United Kingdom [submitted] a demarche to the Ministry of Foreign Affairs of the Republic of Korea in order to express their strong concern regarding the issuing of orders by local and regional authorities, including the Seoul Metropolitan Government, ordering foreign workers to undergo mandatory Covid-19 testing,” the European Union Delegation in Korea said in a statement Friday.

“While commending Korea for its overall approach to the pandemic, the ambassadors considered the orders for mandatory testing to foreign workers discriminatory, disproportionate, without medical justification, and not conducive to achieving the desired effect of lowering the number of Covid-19 cases.”

Last Friday, the central government ordered the Seoul city government to amend its order on grounds that it was discriminatory to foreigners.

The city government rescinded the order Friday, replacing it with a recommendation, which held no legal enforcement power.

Other local governments have replaced their orders with recommendations.

Earlier in the month, the Incheon city government issued a directive to foreign workers in the city to be tested by March 24. It changed the directive to a recommendation last Friday.

“The central government got in touch with us about discriminatory elements regarding the directive, and the city government agreed that it would be best to replace the directive with a recommendation,” a press official of the Incheon government told the Korea JoongAng Daily. “The recommendation now applies to all businesses that have at least five employees regardless of their nationalities.”

As of Monday, a total of 33,195 foreign workers in Incheon got tested. Of them, 24 tested positive, according to the city government.

Local governments in Gyeonggi, South Jeolla, Gangwon and North Gyeongsang also issued directives earlier in the month telling foreign workers to get tested. Those who refused could be fined.

Gyeonggi had seen some clusters of infections among foreign workers earlier in the month. A cluster that began in a group of foreign workers in Dongducheon led to at least 150 cases. Another city in the province, Namyangju, had a cluster of some 120 foreign workers tied to a plastics factory.

The deadlines for the directives in Gyeonggi, Gangwon and North Gyeongsang expired as of Tuesday. A total of 348,792 foreign workers in Gyeonggi got tested, of whom 329 tested positive, according to the provincial government.

“The directive applies to businesses, not to the foreign workers themselves, and the businesses will be held responsible if their workers do not undergo testing before the deadline,” an official of the infectious disease management department of the South Jeolla provincial government told the Korea JoongAng Daily. “Although there has been talk that the directives are discriminatory, I think the one we issued in South Jeolla is different because we made sure to include the Korean workers as well.”

The order applies to at least 14,125 foreign workers registered in South Jeolla, according to the provincial government.

As of Tuesday, a total of 24,742 people – foreign workers, Korean nationals working at businesses hiring foreign workers and non-registered foreign workers – had been tested for Covid-19. Of them, just one, a foreign national, tested positive, according to the provincial government.

The official said that the directive was issued after a group of Syrians tested positive for Covid-19 in the province earlier in February.

When asked if there were additional outbreaks tied to foreign workers in the province since, the official said there was only one.

These orders have been puzzling some foreign workers.

“There is absolutely no logic behind the test as the outbreak was two provinces away, in Gyeonggi. It doesn’t make sense to test foreigners now in Jeollanamdo [South Jeolla],” said an English teacher based in South Jeolla, who asked to be identified only by her first name, Madison.

“The mandate pushes the narrative that foreigners spread Covid in Korea. I have already heard from a coworker that, ‘Foreigners are spreading Covid because they don’t follow the rules.’ It makes me feel awful to think that Koreans see us this way when we’ve been following all of their guidelines.”

Madison, who came to Korea from the United States five years ago, added that the provincial government and local government agencies had different messages about the order, adding confusion as to who exactly were mandated to undergo testing and whether they should quarantine after the tests.

“Based on my understanding, the Provincial Government told foreign workers that they must be tested by March 31st or face a 3,000,000 won [$2,660] fine and that Koreans were only encouraged to do so if they felt it was necessary,” she said. “In regards to the actual test, we’ve heard mixed things about whether or not we should quarantine after taking the test until we receive the results. Some teachers were told to come into work right after taking their Covid test, while the Jeolla Office of Education told us that we should stay home while waiting for our test results. I’ve heard of some schools refusing to follow these guidelines and pushing their teachers to come into work, which seems negligent if they’re so worried about us having Covid, especially around students.”

The National Human Rights Commission of Korea said in its statement Tuesday that the central government and local governments ought to work on improving the working environments for foreign workers in the country if they wish to prevent the spread of Covid-19 among foreign workers.