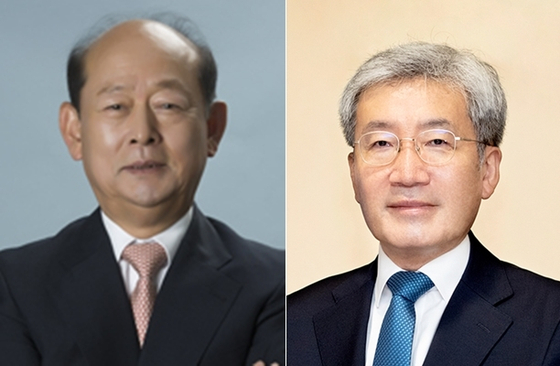 Koh Seung-beom, a member of the Bank of Korea's monetary policy board, was tapped as the new chairman of the FSC, the financial regulatory body, replacing Eun Seong-soo.

Park Soo-hyun, senior presidential secretary for public communication, said in a statement on Koh’s nomination, “With his extensive knowledge of macroeconomics and experience in economic crisis response, he will be able to address financial issues, such as Covid-19 aid, managing household debt, innovation in the financial industry in the digital era and financial consumer protection, and contribute to economic recovery through close cooperation and communication with relevant agencies.”

Koh passed the civil service exam in 1984 and has spent most of his career dealing with economic and financial policies both at the Ministry of Economy and Finance and the FSC.

He has experience in financial stabilization measures, playing a hand in handling the credit card bubble in 2003 and the savings banks’ project financing loans crisis in in 2011.

Koh is a graduate of Seoul National University and earned his doctoral degree in economics from American University.

He became the first board member to serve a second term in the Bank of Korea last year.

“The most important task will be to carry out government and financial policies without any setbacks while striving for economic recovery and overcoming the Covid-19 crisis.” Koh said after his nomination Thursday. “I will prepare for internal and external uncertainties while thoroughly managing economic and financial risk factors such as household debt and asset price fluctuations.”

Eun’s departure came as a surprise as the FSC chairman is guaranteed a three-year term, though other top financial regulators have left the post early in the past.

A Blue House official said that Eun “expressed his desire to resign first,” after serving “without a moment to rest” as head of the FSC since September 2019 and in a series of roles in the past years including president of the Export-Import Bank of Korea, head of Korea Investment Corporation and World Bank executive director.

Song Doo-hwan, a managing partner at law firm Hankyul and a former Constitutional Court justice, was nominated as chairman of the National Human Rights Commission out of a short list of three candidates.

A graduate of Seoul National University College of Law, the human rights lawyer has served as board member of the Korean Bar Association and president of the progressive Minbyun, or Lawyers for a Democratic Society.

In 2003, Song was appointed by then President Roh Moo-hyun as a special counsel to probe allegations that the Kim Dae-jung administration secretly offered cash to North Korea in exchange for the inter-Korean summit in 2000.

Song was appointed by Roh to serve as a Constitutional Court justice in 2007 and served a six-year term before entering private practice.

Prior to his nomination to head the state rights watchdog, he chaired a prosecution reform committee at the Supreme Prosecutors’ Office under the Moon administration.

Song in 2019 served as an attorney for Gyeonggi Gov. Lee Jae-myung who was alleged to have violated the election act by for spreading false information in the 2018 local elections.

Presidential Secretary Park said Song has “campaigned to protect fundamental rights such as political freedom and protecting the rights of the socially disadvantaged.”

Koh and Song will have to undergo confirmation hearings by the National Assembly.

Yeo Han-koo, the presidential secretary for new southern and northern policies, was named as the new trade minister, replacing Yoo Myung-hee who had failed in her bid to head the World Trade Organization.

Park Ki-young was promoted as second vice minister after serving as head of the Ministry of Trade, Industry and Energy's planning and coordination office.

Ko Kyu-chang was promoted to vice interior minister after leading the Ministry of the Interior and Safety's policy planning office.

Park Moo-ik, head of the Transportation Ministry's transportation logistics office, was named as chief of the National Agency for Administrative City Construction.

Hong Hyun-ik, a senior researcher on security and strategy studies at the Sejong Institute think tank, was named as the new chancellor of the state-run Korea National Diplomatic Academy.

Separately, Jeong Eun-bo, the former chief negotiator for the most recent defense cost-sharing negotiations with the United States, was named as governor of the Financial Supervisory Service (FSS). The position is recommended by the FSC, and the president appoints the nominee. The post has been vacant for three months.

Some key posts continue to remain vacant such as the new head of the Board of Audit and Inspection (BAI) after former chairman Choe Jae-hyeong resigned to run for president in June, as well as the oceans minister position.

Many human rights complaints were of sexual harassment