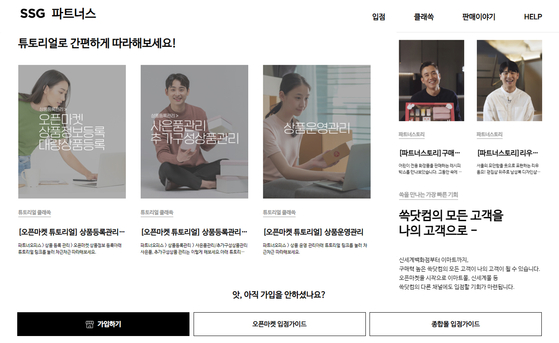 
The big retail shakeup has started as the marts and markets react to Coupang’s New York IPO and prepare themselves for the sale of eBay Korea, which could change the competitive landscape and significantly shift market shares.

SSG.com, Emart’s e-commerce operator, is jumping into the open market retailing model, while Lotte Shopping is investing in Joonggonara, the largest second-hand online platform in Korea.

SSG.com on Wednesday said it will roll out an open-market service next month.

The open market services, already provided by Coupang, TMON and eBay Korea, enable individual sellers with a business license to freely market their products on a platform.

SSG.com “was told that it lacks product categories,” said Kim Ha-eun, a spokesperson for the company. “Up until now, only products from verified sellers were sold on SSG.com, but the launch of the open market will enable anyone with a business license to sell their products. But those who cause problems by selling low-quality products or counterfeits will be dropped.”

The company expects around a thousand additional types of products when the open market service is initiated.

SSG.com plans to begin a trial service on April 20, with the goal to start the service in the first half of the year.

Groceries, daily necessities and luxury brands will be excluded from sales by individual sellers “to maintain the credibility of SSG.com,” but the company plans to expand goods in other categories, including digital devices, sports items and fashion and beauty products.

Ahead of the Wednesday announcement, Shinsegae Group, which runs Emart, participated in the preliminary bidding to acquire eBay Korea.

Emart’s open market service is expected to generate synergy effects with eBay Korea if Shinsegae wins, as it was the third largest online seller in Korea last year, after Naver and Coupang.

Kang Heui-seok, Emart CEO, on Wednesday said at the company shareholder meeting that Emart is seriously considering whether the acquisition of eBay Korea will help the business.

Lotte Shopping is investing between 20 and 30 billion won ($18 million to $27 million) in Joonggonara.

The company is becoming an investor in the acquisition of Joonggonara by a private equity fund, which is acquiring 93.9 percent of the online second-hand sales platform.

Korea’s secondhand market is estimated to have reached around 20 trillion won in 2018, five times the value in 2008. A total of 10.9 million smartphone users in Korea, or 27 percent, installed secondhand marketplace apps as of June last year, according to data by market researcher Nielsen Koreanclick.

“Transactions on Joonggonara last year totaled 5 trillion won,” said Lee Jin-hyeop, analyst at Yuanta Securities. Lotte’s decision “is deemed positively as secondhand markets are growing rapidly. [Lotte] could use the offline stores as a foothold to attract customers that seek to trade second-hand items,” Lee added, while noting the need to raise the commission to sellers.

Kia plans to take on the used car market