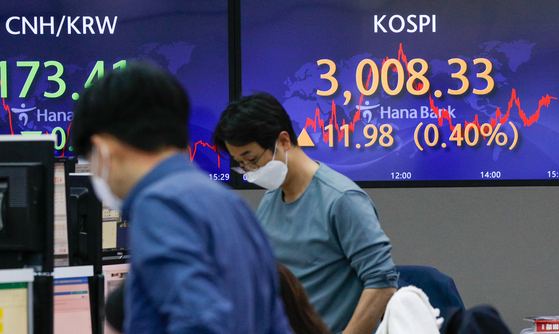 A screen in Hana Bank's trading room in central Seoul shows the Kospi closing at 3,008.33 points on Wednesday, up 11.98 points, from the previous trading day. [NEWS1]


Korean stocks snapped their four-day losing streak Thursday as investors bought undervalued shares on expectations of a rebound amid eased virus concerns. The Korean won rose against the dollar.

The stock market expanded gains after a lackluster start, though North Korea launched two projectiles into the East Sea.

The secondary Kosdaq index closed at 954.99 points, slightly up by 0.12 percent from the previous close.