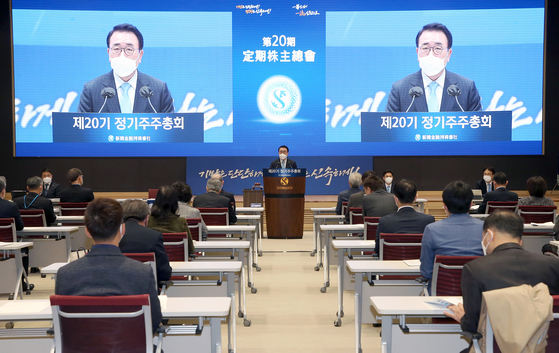 Jin was reappointed with 75.89 percent of participating shares voting in favor.

Institutional Shareholder Services (ISS) advised shareholders of Shinhan Financial Group to vote against the reappointment of Jin earlier in the week as he has been warned of a reprimand by the Financial Supervisory Service (FSS) related to Shinhan Bank’s mis-selling of Lime Asset Management funds.

The FSS in February notified Shinhan Bank that its CEO would receive a reprimand that could prevent Jin from taking executive jobs at financial companies for the next three to five years. The reprimand is subject to ongoing discussion by a committee of the FSS and the Financial Services Commission.

Even if the reprimand is confirmed, Jin will be able to finish his current term as the bank’s CEO and the group’s director, which will last two years, according to an official from the FSS.

While the FSS committee held meetings twice, the most recent on March 18, to discuss the level of reprimand for Shinhan Bank, it failed to come to a decision yet and said discussions will resume in the future. The exact date was not revealed.

ISS said the directors failed to block Shinhan Financial Group chief Cho Yong-byoung from extending his term at the group, despite having committed hiring-related offenses.

Cho was sentenced to six months in jail, two years suspended, for illegally influencing hiring decisions in favor of certain candidates. His term as CEO of Shinhan Financial Group was extended for three years in March last year. The National Pension Service, the group’s largest shareholder, and ISS opposed his reappointment, but he was still reappointed.

During Thursday’s shareholder meeting, the financial group also changed part of its articles of association to enable it to payout quarterly dividends, at the end of March, June and September.