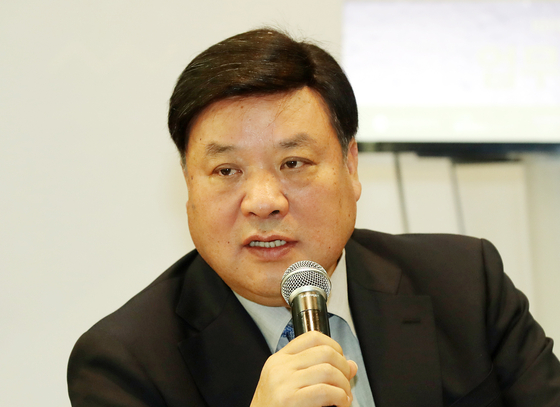 Celltrion founder Seo Jung-jin officially stepped down from the company, leaving its board on Friday.

Their appointments were approved by shareholders at the companies’ annual general meetings on Friday.

“Seo Jin-seok is joining the board in my place but the company’s management will be led by business professionals,” the former chairman told shareholders during the meeting. “Dividing ownership and management may not be the ultimate answer but my goal is to realize a model close to it as possible."

Management of the Celltrion Group will be headed by Vice Chairs Kee Woo-sung and Kim Hyoung-ki, respectively chief executives of Celltrion and Celltrion Healthcare, a spokesman added.

The elder Seo will hold on to the title “honorary chairman” but will not be engaged in Celltrion’s business anymore.

The founder promised to retire last year, saying the successful launch of the Covid-19 treatment regdanvimab would be his last project. Regdanvimab, which goes by the product name Regkirona, received conditional use approval from Korea’s drug regulators on Feb. 5 and is currently in use as an official treatment at local hospitals.

Seo told reporters last year he planned to establish another start-up in the healthcare industry after retirement.

Seo founded Celltrion in 2002. In less than two decades, Celltrion has grown to a company with market capitalization of 42.4 trillion won as of Friday.

Originally known for bio similar products, the company saw its value soar during the Covid-19 pandemic as a domestic leader in the race to develop a coranavirus treatment.

Regdanvimab is undergoing reviews for use in Europe. Seo told shareholders that the European Medicines Agency will likely announce results before Saturday morning.

“We’re currently discussing exports with seven countries,” he said, adding that if all goes well, the treatment will be sold at around 85 percent the price of competing products.