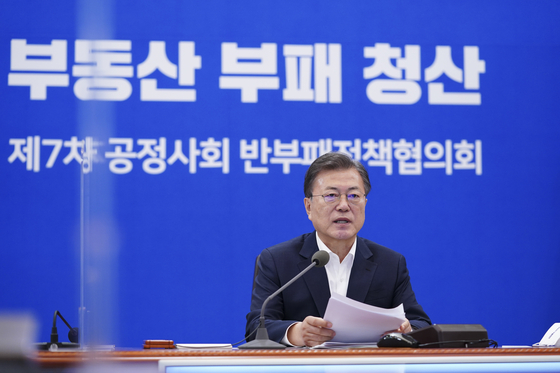 The government threatened to crack down on unethical real estate deals, saying using inside information to make money could cost an investor dearly.

If caught, the fine could be three to five times the profit made from the investment. Jail time of up to five years might also be possible depending on the level of offense.

The government on Monday announced measures meant to prevent another real estate scandal like the own engulfing state-owned developer Land and Housing Corp. (LH), whose employees bought land on sites to be redeveloped using inside information.

The measures also threaten to crack down on using false information to manipulate prices or avoid taxes.

“The goal of the measures is clear,” Finance Minister Hong Nam-ki said Monday. “First is to create a system that will root out the source of real estate corruption. Second is the overhauling of real estate-related public institutions including LH, and thirdly, regain the public’s trust in [the government's] real estate policy.”

To crack down on flipping of real estate, the government said starting next year, the capital gains tax rate will be raised on real estate being sold after being owned for short periods.

The capital gains tax on sale of real estate owned for less than a year will be raised from 50 percent to 70 percent.

The capital gains tax on sale of real estate owned for more than a year but less than two years will be raised from 40 percent to 60 percent.

Public servants, including people working at central and local government-owned companies will be required to report all their assets.

Most such civil servants, numbering around 1.3 million, will have to report their personal wealth to the audit department of the organization that employs them.

People working in departments related to real estate and housing will have to report their assets to the Ministry of Personnel Management.

Previously, only high ranking civil servants and executive-level employees at public corporations such as LH were required to report assets.

With the changes, the government estimates that 300,000 public servants will be subject to the asset disclosures, up from a current 230,000.

When including some 10,000 employees of LH, the total number of people working at local government-owned development companies is estimated at 70,000.

When reporting assets to the ministry, the employees have to include financial sources used to buying properties such as loans.

The government also announced the creation of an agency that will monitor irregular real estate transactions.

And to encourage whistleblowers, the reward for reporting illegal acts will be raised from 10 million won ($8,800) to up to 1 billion won.

During a meeting on anticorruption held at the Blue House on Monday, President Moon Jae-in ordered the government to crack down on unethical real estate investment by civil servants or employees of public companies.
“This is the last chance to reverse the public’s [unfavorable] evaluation of the government’s real estate policy,” Moon said.