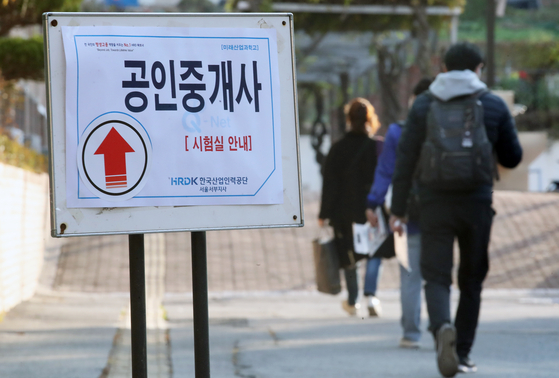 With the overheated housing market, the number of applicants taking the state-sponsored test to become a licensed real estate agent reached an all-time high this year.

A total of 343,076 applicants took the country’s annual test for the licensing of property agents, which was held in 460 sites across the country on Oct. 31. The number increased by 13 percent on year. It was the highest number of applicants since 1983, when the test was first introduced.

The recent growing popularity of property agents as a career is largely due to the opportunity for high commissions they receive as property prices surge.

Under Korean law, real estate agents in Seoul can charge up to 0.9 percent to both sides of a transaction. If a buyer purchases a 1 billion won ($882,000) worth of property through a real estate agent in Seoul, the agent can get about 9 million won from both buyer and seller, which comes to 18 million won in total.

About half of all apartments in Seoul are priced 900 million won or above, according to a report by KB Kookmin Bank.

Opening a real estate agency is risky. With many Koreans giving up on their quest to buy a property amid tightened real estate regulations, many agencies have gone out of business.

According to Korea Association of Realtors, roughly 1,087 real estate agencies closed in July — and this number increased to 1,097 in August. Meanwhile, 1,302 agencies were newly opened in August, a 11.3 percent decrease compared to a month earlier.

In September, the Ministry of Economy and Finance finalized the country’s record budget for 2021. According to the plan, a total of 13.3 billion won will be allotted to apply blockchain to 19 new fields — which includes the introduction of a system that allows people to make real estate transactions without real estate agencies or agents.

In response to that, Korea Association of Realtors on Sept. 24 held a rally urging the government to halt the plan in front of the National Assembly in western Seoul.

Real estate commissions may be adjusted to ease the burden for house seekers.

“With the increasing real estate prices, many people have been suffering from high commissions,” Kim Hyun-mee, minister of land, infrastructure and transport, said on Oct. 16. “As many agents also feel burdened due to the decreasing number of real estate transactions, we just started monitoring the market.”

Shim Kyo-eon, a real estate professor at Konkuk University, said people should be cautious on opening real estate agencies as they are the business sectors that are easily hit by the financial situation of the country.

“As there has been a growing interest in [real estate market] due to the recent skyrocketing property prices, people facing a job crunch turned their eyes to acquiring a license to be a real estate agents,” added Shim.