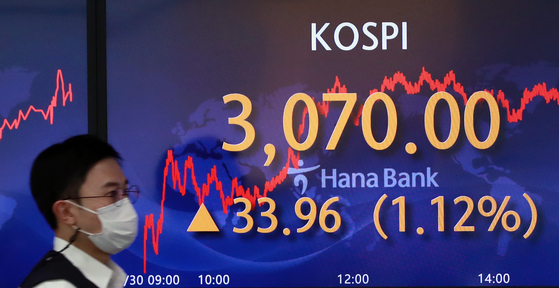 A screen in Hana Bank's trading room in central Seoul shows the Kospi closing at 3,070.0 points on Tuesday, up 33.96 points, or 1.12 percent from the previous trading day. [NEWS1]


Stocks advanced more than 1 percent Tuesday on strong foreign and institutional buying, aided by expectations of a quick global economic recovery from the pandemic. The won fell against the dollar.

Trading volume was moderate at about 1 billion shares worth some 13.9 trillion won ($12.3 billion), with gainers outnumbering losers 531 to 307.

The Kospi got off to a strong start, taking a cue from a fresh peak on the Dow Jones Industrial Average, backed by the progress in the U.S. vaccine rollout.

Investor sentiment ran high as the world's largest economy is set to unveil an extra stimulus program later this week, which includes increased spending on infrastructure. The U.S. is one of Korea's largest trading partners, along with China.

"Investors also seemed to have targeted companies with potential hikes in earnings, since the [quarterly] report season is near," he said.

The local currency closed at 1,133.6 won against the dollar, up 1.9 won from the previous session's close.