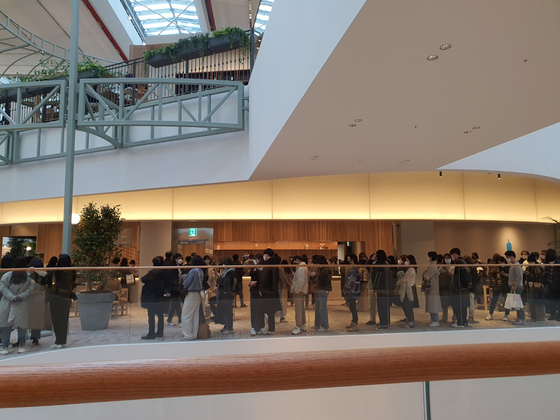 People line up at the Blue Bottle , located in Yeouido, western Seoul at The Hyundai Seoul. [CHU IN-YOUNG]


Despite strengthened social distancing guidelines, Korea's coffee shops have been doing quite well mainly due to the increase in demand for coffee delivery and more people who enjoy drinking coffee at home.

The most crowded venues in The Hyundai Seoul, located in Yeouido, western Seoul, are Blue Bottle, Camel Coffee and Michele Coffee. Even on a weekday afternoon, the Blue Bottle has a 130-person wait, with some giving up and walking away.

“I already can't do what I want due to the Covid-19 pandemic," said a woman who had been waiting for three hours for a cup of coffee. I will “not leave until I get my cup of coffee."

Koreans have demonstrated their love for coffee for many years. According to market research firm Euromonitor International, the size of Korea's coffee shop market is approximately 5.4 trillion won ($4.7 billion), the third largest market in the world, after the United States and China. Koreans annually spend an average of 104,000 won on coffee per person, also ranked third for per-person spending.

"With information easily accessible online, people who visited social media and saw photos, making them want to do the same thing, visit the same places," said Lee Young-ae, a professor at the Department of Consumer Science at Incheon National University. "As people become worn out due to the pandemic, more and more people want to reward themselves."

Lee added that coffee is a less-expensive product known to provide gasimbi, a Korean term describing the best psychological value for money, and sohwakhaeng, a term used to describe “small but certain happiness.”

With restrictions making it hard for people to visit cafes, Koreans have turned to “home cafés,” choosing to enjoying coffee at their homes.

The trend has led to a noticeable increase in sale of coffee machines and appliances.

“The 5400 Latte Go is an expensive model priced at one million won, but popular colors are already sold out,” said a spokesperson for Philips Korea. “With more people wanting to recreate the experience of enjoying coffee at a specialty coffee shop, premium products are becoming more popular.”
For Breville, a brand selling kitchen appliances, including coffee makers, January sales jumped by 282 percent compared to same month a year earlier.

The number of coffee deliveries have also surged since the Covid-19 pandemic started.

Many coffee franchises have partnered with food delivery apps such as Baedal Minjok, Yogiyo and Coupang Eats and started delivering coffee to doorsteps.

In response to the increasing number of people drinking coffee at home and work, coffee brands are focusing on home café products.

Ediya Coffee added three more flavors to their coffee capsule range. The company also upped the quality of its instant coffee mixes, freeze drying the coffee for a better flavor and aroma.

“In Korea, coffee was mostly consumed at cafés, but the number of people enjoying coffee at home sharply increased since the Covid-19 pandemic,” said Oh Yoon-jeong, a director at Exporum, an exhibition company preparing the 2021 Seoul Café Show. “The coffee industry is responding to such changes by focusing on business-to-customer strategies, making coffee drip bags, ready-to-bake pastries and small-sized coffee syrups.”

Although the popularity of home cafés is on the rise, Oh believes that this will not entirely change how Koreans consume coffee.

“Many Koreans want to chat with others at nice-looking cafés, rather than at their homes and workplaces," said Oh. "A Café is a cultural complex, well-known to the people as a gathering place. I believe that personal demand for cafés will continuously increase."

The future’s not bright for all cafés. Increase in sales is limited to popular coffee shops and coffee appliance sellers. Apart from those, many coffee shops are suffering.

Under the current Level 2 social distancing regulation, cafés in greater Seoul must close by 10 p.m. Café-goers are limited to staying for no more than an hour. The regulation also bans private gatherings of five or more people.

Starbucks Korea, the No. 1 coffee shop in Korea in terms of sales, reported a 6.1 percent of on-year decline in its operating profit last year.

"Coffee shops have been hit hard by the pandemic," an employee who works at a coffee shop said. "People need to see more than just the long lines at famous cafés. Many cafés go out of businesses because they can't afford the rent."