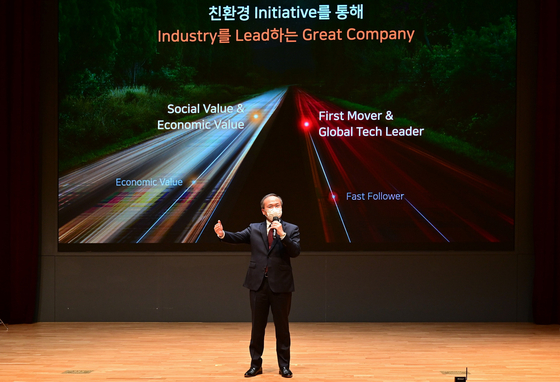 
SK hynix wants to open research and development units in the United States or Europe and is leaving the door open to more mergers and acquisitions.

“[SK hynix] is devising ways to develop the research and development infrastructure in the U.S., Europe and other regions,” said the chipmaker’s CEO Lee Seok-hee during a shareholders’ meeting on Monday.

The CEO hinted at the possibility of more acquisition after its buying of Intel’s NAND flash memory business last year.
“If it proves to be a great opportunity, a new round of mergers and acquisitions are available at anytime,” the CEO told reporters after the meeting.

The chipmaker's board made a major personnel decision on the same day as it appointed SK Telecom CEO Park Jung-ho as co-CEO of SK hynix. Park will jointly run the chip producer with Lee. SK Telecom owns 20.1 percent of hynix shares.

The chipmaker explained that Park will look for new business opportunities and enhance the corporate culture while Lee will focus on product development and investment.

With the appointment, Park stepped down as hynix’s chair of the board, and was replaced by board member Ha Young-koo, former Citibank Korea CEO.

CEO Lee described at the shareholder meeting how the company will fortify its NAND flash memory business in tandem with the purchase of Intel’s business unit.

NAND flash refers to a non-volatile storage chip that does not require power to retain data. SSD is a storage device using the NAND flash architecture.

In the meantime, global ratings firm S&P upgraded its outlook for the chipmaker as a worldwide shortage of chips will likely boost the bottom line of the company.

“The outlook revision reflects our expectation that hynix's operating performance will be strong over the two years on back of favorable industry trends,” the S&P said in a statement.