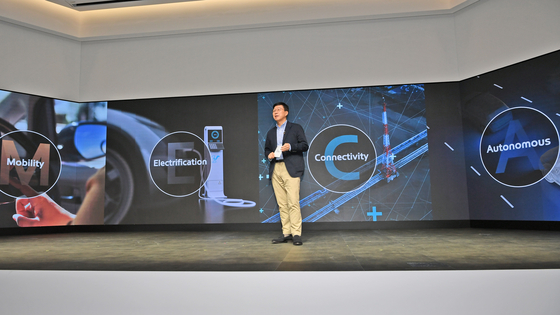 
Hyundai Mobis is aiming to transition from a traditional auto parts supplier to a platform provider that combines hardware and software technology, Executive Vice President Jung Soo-kyung said on Wednesday.

“Today, vehicles are a mobility platform where customers ask for innovative features in convenience and safety — that in turn is pressuring the need for automakers to increase the portion of electric feature and software technology,” said Jung, who is also head of the company's planning division, at a media event at the company’s Yongin office in Gyeonggi.

“IT firms are joining the industry as new players and their growth is remarkable. For existing top tier companies like us, our fate will rely on how well we succeed in developing software technology behind each auto parts that will increasingly become connected and autonomous.”

An important mission for the company to realize that goal, Jung said, would be developing technology in software and semiconductors. Despite its decades of experience in manufacturing auto parts, Hyundai Mobis currently falls short in these tech fields. In December last year, Hyundai Mobis acquired the semiconductor business unit of affiliate Hyundai Autron.

The parts maker said it plans to expand partnerships with external firms, like the one with Yandex, a Russian IT company, under which the two are developing a level 4 self-driving taxi.

With the accumulated technology, Hyundai’s aim in the distant future is to expand outside the automobile industry to aerospace and robotics, Jung added.

On Wednesday, Hyundai Mobis introduced two new concept cars to the local press. The company had previously unveiled the cars at the online CES 2021, but this was the first time that media were given a chance to see them in person. 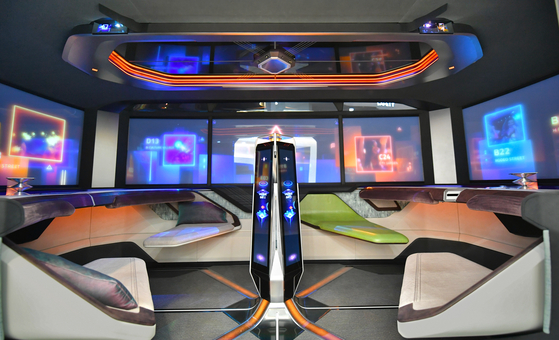 
The M Vision X, a purpose-built vehicle for four passengers, is a concept car designed to fulfill specific purposes like logistics or shuttle operations. With a rectangular design, the vehicle looks more like a tram than car.

The M Vision X has improved on previous concept cars with the introduction of a centerpiece that Hyundai calls a “vertical cockpit.” The rectangular pillar has a 28-inch display attached to all four sides, one facing each of the four passenger seats. Passengers can use hand gestures to control the speaker, switch to self-driving mode or use infotainment features. After they get off, the vehicle will automatically disinfect its interior using ultraviolet light.

The M Vision X has four walls made with transparent panels that can be used as individual displays, or one large display when combined.

While the M Vision X was made for a distant future of self-driving vehicles, the M Vision Pop was made with technology that could be mass produced within the next five years. 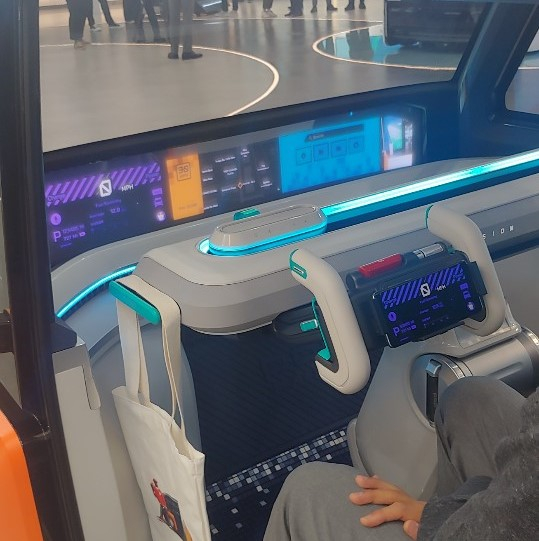 The electric vehicle has two passenger seats with a cockpit that allows a user to attach a smartphone to the steering wheel to show navigation maps or receive voice requests. Instead of a traditional instrument cluster, the front window had a narrow display on the bottom to show information.

“The technology in the M Vision Pop is being developed with speed as its priority," said Cheon Jae-seung, head of fundamental and advanced technologies lab. "The display part is already realizable but the software part is what we still have to work on."