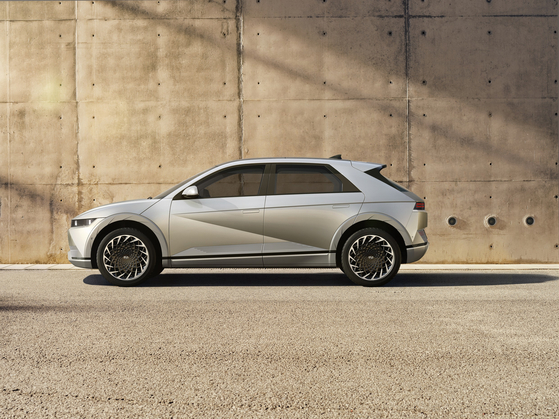 Korea’s auto industry is increasingly divided into two groups, one capable of handling explosive demand and looking to a bright future and the other on the brink of bankruptcy.

In the former group are Hyundai Motor and its smaller affiliate Kia, which last month accounted for 88 percent of domestic sales made by domestic automakers in Korea.

In terms of domestic sales only, Hyundai Motor sold 52,102 units in February, accounting for 51 percent of all sales made by five Korean automakers. Kia sold 37,583 units, accounting for 37 percent. Hyundai's sales were 30 percent higher than a year earlier, Kia's 31 percent.

The two automakers’ winning streaks are likely to continue through this year with scheduled launches of electric vehicle (EV) models amid global hype around such cars.

Hyundai Motor’s new Ioniq 5, its first model produced on an EV-dedicated platform, received 23,760 orders in Korea on its first day. That is 96 percent of its sales goal for 2021.

Kia’s upcoming EV model known by its project name CV, which is slated to be released in March, is also expected to be a hit.

While its flagship SUV models such as Trailblazer and Equinox showed growth in Korea last month, GM Korea’s local production has experienced disruptions due to the global shortage of auto semiconductors.

In line with an order from Detroit headquarters, GM Korea has been operating its Bupyeong No. 2 factory in Incheon at half its capacity since the beginning of February.

Its monthly production capacity is 10,000 units, so production of some 5,000 units of Malibu sedans and Trax SUVs have been sacrificed. 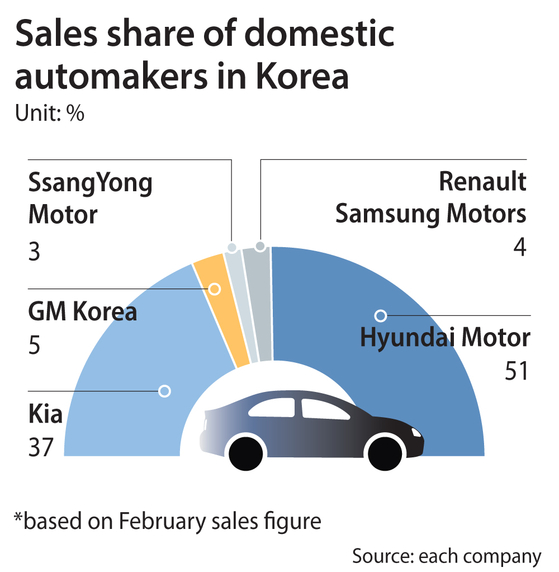 The Korean unit of the Renault-Nissan-Mitsubishi Alliance, which went into the red in 2020 for the first time in eight years, has been offering voluntary retirement packages to employees from the beginning of this year.

Its labor union still hasn’t come to agreement with management on 2020 wage negotiations.

Jose Vicente de Los Mozos, executive vice president of Renault Group, warned last month that if the productivity of its Busan plant doesn't get better, production of an export model could be stopped. The Busan factory relies heavily on that model, the XM3 SUV.

SsangYong Motor, the weakest carmaker in Korea, is trying to find a new owner. If it fails to come to terms with potential investors within March, it is likely to go into court receivership.

The company sold 2,673 units in February, fewer than import brands like Mercedes-Benz and BMW, both of whom sold more than 5,000 units.

Its Pyeongtaek factory operated less than a week last month as suppliers refused to deliver parts because they were worried they wouldn't get paid. It resumed operations from March 2.

"The situation is likely to continue, if not get worse," said Lee Ho-geun, an automotive engineering professor from Daeduk University.

"The competitiveness of the three minor domestic carmakers is ever decreasing with walkout risks and few new models, which is the only communication channel carmakers have with their customers. Unless there are breakthrough new models or extraordinary deals such as an Apple car, their market share will continue to dwindle, as they lose customers to imported carmakers."