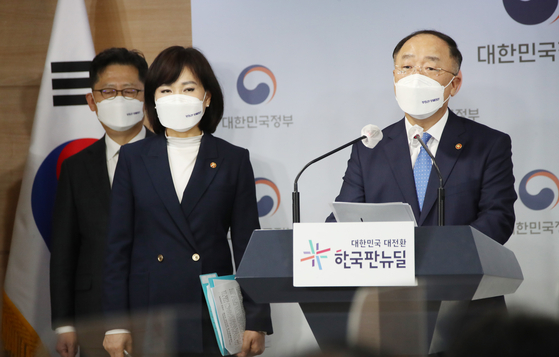 
Civil service unions are angry after the administration said all government employees will be required to disclose their assets.

"It's no different than labeling every public servant a criminal," the Daegu Public Official Union said in its statement released immediately after the government announced measures that require all civil servants to report any assets under their name on Monday. "We face a miserable reality where we not only have to disclose our own but those of our parents just because we are public servants."

The union demanded that the government retract its measures immediately.

It also raised questions over the effectiveness of its new measures, noting that most of the lower level employees work in community centers, which has nothing to do with access to sensitive information related to real estate development.

"It is impossible to access insider information," the union stated.

The government on Monday announced measures aimed at preventing another property in which insider information is used in real estate purchases.

The employees are accused of buying land and planting trees to get compensated when the land is sold to the government for the new town project, significantly increasing profit from the transaction.

The exposure has expanded to land purchases made by other civil servants, and one arrest has been made. Several lawmakers of the ruling Democratic Party are also accused of making such purchases using confidential information on future development.

"We reassessed the current law, institutional system and previous conduct to prepare measures to root out land speculation," said Finance Minister Hong Nam-ki, who also serves as the deputy prime minister of economy, during a briefing session on Monday. "All public officials will have to register their wealth."

President Moon Jae-in ordered a swift but thorough investigation into the scandal.

"Regardless of affiliation and position, illegal land speculation by public officials needs to be transparently disclosed and strictly punished," said President Moon, during an anticorruption meeting held at the Blue House on Monday.

Currently only high-ranking public officials are obligated to report their wealth. Among the nine levels in the government, only those from four and above are subject to this regulation.

Under the new regulations, lower-level civil employees down to the lowest have to report any assets that they owned.

According to data from the Ministry of the Interior and Safety, there are approximately 1.1 million public servants in Korea as of December 2019. Adding public institution employees, a total of 1.3 million employees will be subject to report their wealth.

The Daegu Public Official Union also emphasized the limitation to the mandatory reporting of personal assets, especially when the real estate is purchased under another name.

The Finance Minister Hong, however, said using the government's financial information query system, the government has the ability to track down such malicious practices.

Some have accused the government of releasing such measures to appease the frustrated public over the government's flopped real estate policies ahead of the mayoral election next week.

"The government needs to stop window dressing its policies prior to the election to avoid an electoral disaster," the Korean Government Employees' Union stated in its statement on March 23. "Lower-level public servants are not a scapegoats for the government to avoid the land scandal."

On concerns that the regulation will waste of administrative power, the Finance Minister said it won't be a huge burden.

"Until the system is formally instigated, public servants will only report their real estate," said Hong. "Since not many own land and houses, it will not be much of a burden."

"This only increases public antipathy in which people question why the government couldn't do so in the first place," said Kim Hyung-joon, a professor at Myongji University's Bangmok College of General Education. "The government's real estate policies have completely lost all trust."