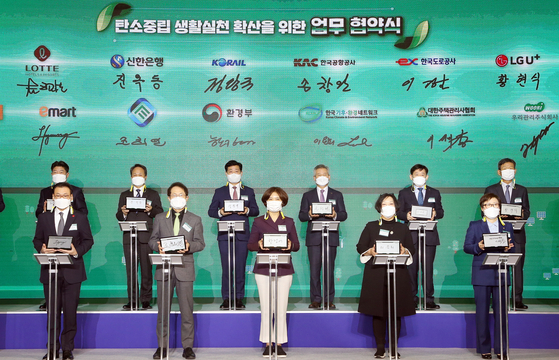 Shinhan Bank CEO Jin Ok-dong, second from left in the second row, and Environment Minister Han Jeoung-ae, center in the front row, pose for a photo after signing an agreement to join forces to strengthen efforts to achieve carbon neutrality Monday at Coex in Gangnam District, southern Seoul. [SHINHAN BANK]


Shinhan Bank signed an agreement with the Ministry of Environment to join the government’s efforts to encourage public to participate activities to achieve carbon neutrality.

Shinhan was the only commercial bank out of 19 companies the environment ministry has signed agreements with. It promised to promote ways to reduce carbon emissions in people’s daily lives.

Under the agreement, Shinhan Bank will offer various programs and campaigns that can promote the government's goals of carbon neutrality and encourage the public to join the movement. These include using stairs instead of elevators, reducing plastic usage and using high-efficiency electronics and home appliances, according to the company.

“We signed the agreement to actively join the movement to reduce carbon emissions in our daily lives,” said a spokesmen for Shinhan Bank. “We will endeavor to start the movement by showing videos at branches about carbon reduction.”

In August, Shinhan Bank has changed its plastic containers into multi-use containers at its headquarters in Jung District, central Seoul and pledged to shift all free gifts to customers to eco-friendly products like reusable shopping bags and air purifying plants.