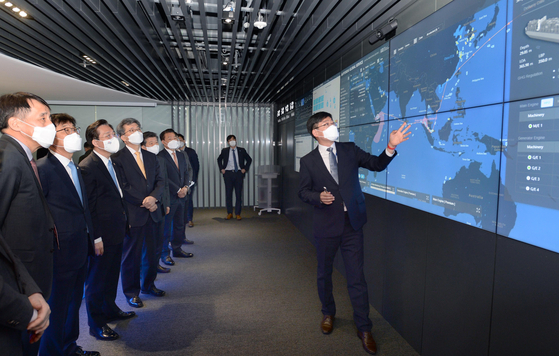 Minister of Trade, Industry and Energy Sung Yun-mo, third from left, is briefed on the smart technology applied to services by Hyundai Global Service, a subsidiary of Hyundai Heavy Industries, at its office in Busan on April 1. [MINISTRY OF TRADE, INDUSRY AND ENERGY]


The government announced that it will speed up the digital transformation (DX) of Korean manufacturers, including auto and steel makers and shipbuilders, in securing Korea's future growth.

The Ministry of Trade, Industry and Energy on Thursday said it will create a 4.6 trillion won ($4 billion) fund by 2025 to boost the digitalization of manufacturing under its "digital big push" agenda.

From the fund, 2 trillion won will be coming from the government's budget, while the rest will be from investment funds and loan guarantees.

The government said it will expand its comprehensive support system and expand the number of industrial data platforms from current five to 14 by the end of this year. The platform will then be expanded further to 50 by 2025.

The platform will be used in sharing information and developing industries-related technologies and joint projects.

The government measure comes amid the widening digitalization gap between large companies and smaller counterparts.

According to a ministry survey conducted in February of 500 companies in 10 industries, the majority still remains in the preparation or at the beginning stage of the incorporation of digital technologies in their manufacturing and service systems.

The study found that large companies, such as those making automobiles and consumer electronics products and those in distribution, were leading in the digital transformation. The smaller companies, especially those in the materials and parts industries, were falling far behind.

The use of data and artificial intelligence at chaebol was around 22 percent, whereas at smaller companies it was 2 percent.

The biggest complaint was lack of expertise, at 47 percent, followed by lack of infrastructure, at 29 percent.

The government said the goal is to raise the average adoption of digital transformation by 2025 and the use of high-tech of leading companies to 30 percent.

"[The government] will offer support, so the spread of the digital transformation, which is difficult for individual companies to do alone, could be seen throughout the industries," said Minister Sung Yun-mo while visiting the Hyundai Global Service in Busan on Thursday.

Hyundai Global Service is the subsidiary of Hyundai Heavy Industries.

The Korean shipbuilder is considered as a successful example of digital transformation, as it constructed a "smart" vessel in March, where every part of the ship from engines to control systems, are constantly monitored through IT technologies.