It's still makgeolli, but it ain't your grandpappy's brew

It's still makgeolli, but it ain't your grandpappy's brew 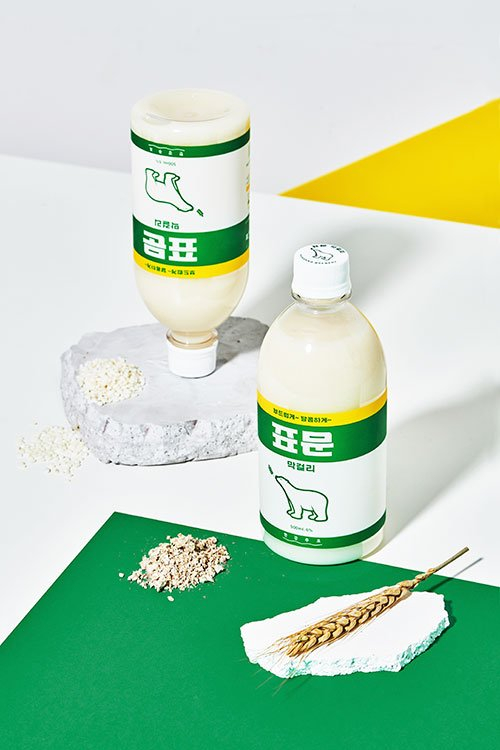 Daehan Flour Mills is planning to release Pyomun Makgeolli on April 4. The flour producer gained popularity after its collaboration with beer, cosmetic and clothing brands. [GOMPYO]


Due to the growing popularity of makgeolli among the young, companies are tweaking the drink to appeal to these customers.

Of the growth, makgeolli consumption among the young is most notable.

With younger drinkers emerging as important customers, makgeolli manufacturers are giving the traditional drink a makeover by lowering alcohol content and releasing products with trendy twists.

CU released a new makgeolli on Friday, naming the product Tes Hyeong Makgeolli. "Tes hyeong" is from Korean trot singer Na Hoon-a's song, "Tes Hyeong," in which the singer asks questions such as, "Why is the world like this?" and "Why is life so hard?" to the Greek philosopher Socrates. The song became a huge meme in Korea after Na's online concert aired during the Chuseok holiday in 2020.

Daehan Flour Mills is planning to release Pyomun Makgeolli on April 4. Pyomun is a wordplay on the company's wheat flour brand Gompyo. When the Korean word for gompyo is turned upside down, the letters look like pyomun. The company has grasped attention of the young due to the offbeat but funny collaborations with beer, clothing and makeup companies.

"We came up with the makgeolli name 'Pyomun' with intentions to overturn the conventional image of Korean traditional liquor," said a spokesperson for Daehan Flour Mills.

Seoul Takju, the Korea's largest makgeolli manufacturer, famous for the Jangsoo Makgeolli brand, changed the traditional green colored bottle to a transparent one. The company also added 'shipjangsaeng,' a Korean term referring to the ten symbols of longevity, on the makgeolli label as a fun abbreviation for longevity of ten days to emphasize makgeolli’s short 10-day shelf life.

With its growing popularity, makgeolli is gaining a presence in luxury hotels as well. The L'escape Hotel's new exclusive room package offers a unique Korean liquor experience, overturning the stereotypical association of hotels and wine. Guests can enjoy Boksoondoga Son Makgeolli with Korean-style fried chicken and makgeolli pairings with the Palais de Chine menus in their hotel rooms.

Baesangmyun Brewery, famous for its Slow City Makgeolli, started the same-day delivery service in the Seoul and Gyeonggi areas. The company also provides subscription services to its customers and delivers makgeolli to the customers every month.

In praise of soju

In praise of soju (KOR)

[WORD_ON_THE_WEB] 'Bigger numbers for everything, except for my wage'