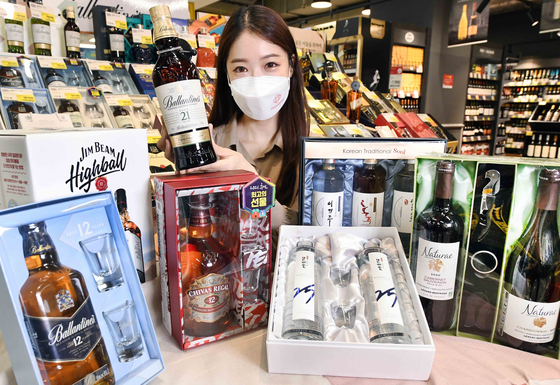 
Nothing says holiday in Korea more than a bottle of soju — or more than one.

But as the Chuseok harvest holiday approaches, retailers like Homeplus are pushing the soju bottles to the back row in favor of Western whiskeys.

“It’s the first time in two decades that whiskeys are displayed in the first row during peak seasons like national holidays,” said a spokesperson for Homeplus. “Whiskeys have been selling well since last year in discount marts and department stores.”


According to Emart, orders for Western style liquor between Aug. 5 and Sept. 9 rose 38 percent compared to same period a year earlier. This year's Chuseok harvest holiday runs from Sept. 20 to 22.

From Jan. 1 to Aug. 31, sales of Western style liquor jumped 64.6 percent. In that group, whiskey sales rose 93.7 percent on year. In Korea, whiskey refers to Scotches and whiskeys from all countries.

It was last February that Western style liquor sales surpassed soju sales for the first time in history, Emart said, on a monthly basis. Sales of Western style liquor in February skyrocketed 224 percent on year. That month included the Lunar New Year holiday, the other big holiday in Korea after Chuseok. 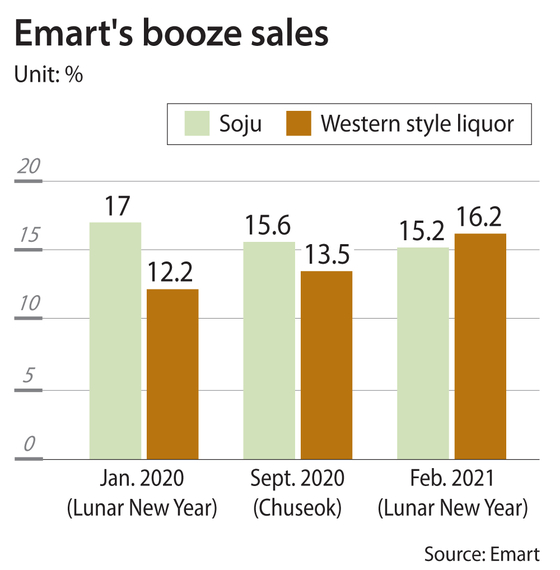 Of all alcoholic beverage sales in February, Western style liquor accounted for 16.2 percent and soju 15.2 percent. Up until the Chuseok holidays of 2020, soju was always No.1. In that final year, it had a 15.6 percent market share followed by Western style liquor's 13.5 percent.

Young consumers are driving the shift.

Of all liquor sales in February at Emart, 52.2 percent were to people in their 20s and 30s compared to 43.4 percent a year ago.

People are unquestionably drinking more, possibly because of the pandemic. Liquor sales at Lotte Mart surged 82.5 percent between Jan. 1 and Aug. 31 compared to the same period the previous year.

Lotte Mart said it doubled its liquor lineup in anticipation of robust demand during the Chuseok holidays.

Imports of whiskey during the January-to-July period were $92.54 million, up 48 percent on year, according to data from the Korea Customs Service.

Whiskey is considered an expensive luxury. But whiskey companies have been launching cheaper versions and selling them in convenience stores to make them more accessible to young customers.

“Young people have stopped thinking of whiskey as an expensive drink that only middle-aged people can afford,” said a source in the alcohol industry.

The 7-Eleven convenience store chain has exclusive rights to sell Macallan Single Malt whiskey series until Sept. 24 while CU is stocking more whiskeys in its branches.

“Western style liquor, which was only popular among middle-aged people, is gaining popularity with young people,” said Myung Yong-jin, a liquor buyer at Emart. “Emart will continue to introduce various liquors targeting customers of all ages.”