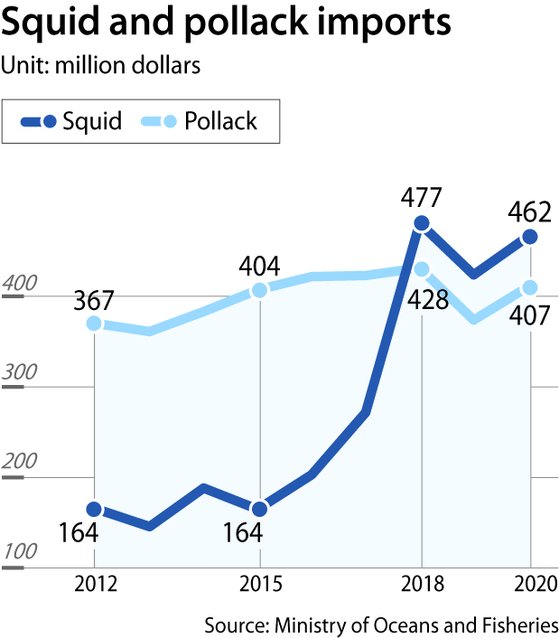 Korea is buying more squid from overseas as the country struggles to wrangle the cephalopods domestically.

According to Ministry of Oceans and Fisheries and the National Federation of Fisheries Cooperatives, also known as Suhyup, Korea imported $462.9 million of squid last year, up 9.9 percent from the previous year. Compared to 2012, when the total was $164.99 million, it's a nearly threefold increase.

Russian pollack was the No.1 imported marine product for nearly a decade, but squid took the top spot in 2018.

Since the Ministry of Oceans and Fisheries banned catching baby squid 15 centimeters (5.9 inches) or less in length starting this year, more squid were imported to cover the demand.

Dried squid, as anju, is a popular snack for drinkers.

Rising ocean temperatures may be reducing the domestic catch.

As the ocean temperature rises in fall and winter, squid in North Korean waters move to the South later than usual and they go back to North earlier.

"The area where a cold ocean current and a warm ocean current meets is the best spot to catch squid, but this area has been moving to North recently," said Kim Yun-bae, head researcher at the Korea Institute of Ocean Science and Technology Ulleungdo Dokdo Ocean Science Station.

Illegal fishing by boats from China is also to blame.

China signed a multimillion-dollar fishing license agreement with North Korea in 2004, which led to an increase in the number of Chinese fishing boats in North Korean waters.

"Illegal Chinese fishing boats have been catching all the squid moving to South Korean waters from North, and this leads to a decrease in the number of available squid in South Korea," Kim added.

"This phenomenon prevents squid from spawning and results in a decrease in the number of squid, leading to a vicious circle."

Korea's exports of marine products dropped 7.4 percent to $2.32 billion last year, mainly driven by a decline in the export of restaurant fish, such as tuna, abalone and halibut.

Seaweed was No. 1 among all other exports, raking in some $601.5 million last year, an all-time high and up 3.8 percent from the previous year. As snacks made with seaweed are gaining popularity in Western countries, seaweed has been maintaining its top spot for two years in a row.

To expand Korea's seafood exports, the Ministry of Oceans and Fisheries and the National Federation of Fisheries Cooperatives are looking forward to attracting international customers via online platforms.

The two groups are currently working together to open a Korean marine product store on international online shopping platforms, including U.S.-based Amazon and Singapore's Shopee.