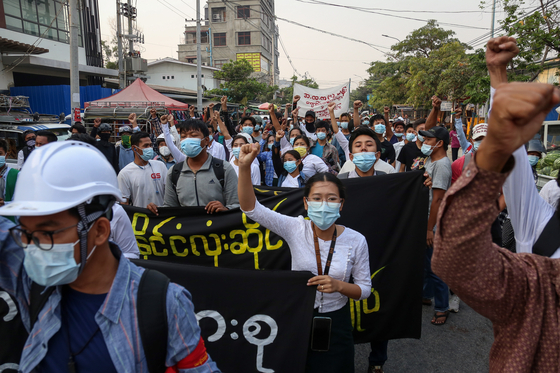 Demonstrators march during an anti-military coup protest in Mandalay, Myanmar, on Monday, amid intensifying violent crackdowns on protesters by security forces. [EPA/YONHAP]


Korea is considering sanctions on Myanmar to support pro-democracy protesters while weighing the potential economic impact -- and the safety of Korean nationals in the country.

The United States and Britain imposed sanctions on Myanmar’s military-affiliated conglomerates in recent days after violent suppression of pro-democracy protesters in the country since February.

In a press conference last Wednesday, Korean Foreign Minister Chung Eui-yong said Korea will “consider additional sanctions if necessary” in response to the Myanmar crisis and “closely cooperate with the international community.”

He added that Korea is “fully prepared to withdraw a significant number of Korean nationals within 24 hours if an evacuation decision is made.”

A Burmese worker in Shinhan Bank’s Yangon branch was shot in the head by armed forces during her commute home on a corporate shuttle bus last Wednesday. She later died. It is still unclear why soldiers inspecting the bus shot the woman.

On Saturday, Korea raised its travel advisory for Myanmar to the second highest in a four-tier alert system, recommending nationals to evacuate the Southeast Asian country and advising Koreans to cancel or postpone trips to the region unless there is an emergency.

The Korean government is also considered a travel ban to Myanmar should the situation worsen, according to a Korean Foreign Ministry official Monday.

The government is already helping Koreans leave the country. Since February, it has helped arrange up to two temporary flights weekly to Korea from Myanmar.

The Foreign Ministry said that 411 out of some 3,500 Korean nationals living in Myanmar have returned to Korea on such flights in the past two months. Seven more temporary flights out of the country are scheduled for April, with over 270 passengers booked to return this week.

Korea has been reviewing options such as additional sanctions but is also taking into consideration the impact such measures could have on future economic exchanges with the country and a possible backlash by the military-controlled government, which could target Korean businesses.

According to the Foreign Ministry, there are some 260 Korean companies in Myanmar. Some 28 Korean financial institutions operate there, including Shinhan Bank, Woori Bank and KB Kookmin Bank. The companies, including 100 textiles factories, are not in a position to temporarily withdraw from the country, however, because they fear they may never be able to return.

The military seized control of Myanmar on Feb. 1, detaining Aung San Suu Kyi, the de facto leader of the ruling National League for Democracy, and declaring a year-long state of emergency. This led to massive protests in Myanmar demanding the military step down and to reinstate the democratically elected government. The Yangon-based Assistance Association for Political Prisoners estimates over 550 people were killed by security forces to date and thousands more detained.

The Korean government issued its first statement on Feb. 2 expressing “deep concern” over the political situation in Myanmar and urging the release of detained political leaders. Seoul’s Foreign Ministry has released multiple follow-up statements in the past weeks urging the restoration of democracy and an end to violence against civilians.

In its latest statement on March 28, the Korean government “strongly condemned” the brutal violence and loss of civilian lives at the hands of the military and police forces on Myanmar Armed Forces Day on March 27, which led to at least 100 people being killed.

In mid-March, Korea suspended defense exchanges with Myanmar and banned arms exports to the country. It was the only Asian country to announce sanctions in response to the military coup. Seoul’s Foreign Ministry said this includes strict control of dual-use items.

The Foreign Ministry said it will review development assistance to Myanmar and continue to “provide support projects which are directly linked to the livelihoods of the people of Myanmar” and humanitarian assistance.

Lee Sook-jong, a professor of public administration at Sungkyunkwan University, said, "Democracy, including the legacy of the May 18 Gwangju democratization movement [in 1980], is a national asset of Korea. Thus, Korea is the most suitable Asian country to raise a voice for Myanmar, a country that has achieved democratization, overcoming the same difficulties that we have.”

The UN Security Council on Thursday “strongly condemned” the violence by the Myanmar military leading to the deaths of civilians amid in a statement that was watered down due to opposition from China and Russia. Likewise, there has been no unified response from the 10-member Asean so far.

Japan, seen as taking a softer stance than Western countries because of its economic ties to Myanmar and relations with the military, announced last week that it will withhold new economic assistance to the country.

“A decision to withdraw from Myanmar should be made only when Korea is prepared not to conduct any future exchanges with the country,” said Jang Jun-young, a Southeast Asian studies professor at Hankuk University of Foreign Studies. “There is not a realistic likelihood that a civil war will break out, and it will take much more time to restore economic relations after the withdrawal."

Shinhan Bank temporarily shut down its Yangon branch after its employee was shot and is currently reviewing whether to withdraw staff from the country. Other Korean banks and companies represented have also been stepping up measures to ensure the safety of their staff, but many are awaiting instructions from the Foreign Ministry before deciding on whether to temporarily withdraw their businesses from the country.

A Foreign Ministry official told reporters in Seoul Monday, “There may not be a civil war immediately, but the situation in Myanmar will continue for a while as the protesters are not losing their vitality, while the military will not back down.”