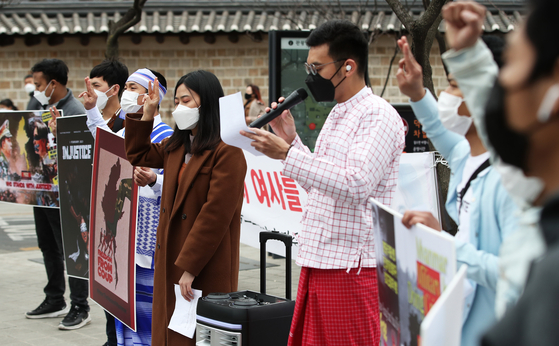 A group of Burmese people living in Korea stage a rally near the Chinese Embassy in Seoul on Sunday, denouncing the Chinese government for supporting the recent military coup in Myanmar. [NEWS1]


Burmese residents of Korea held a rally Sunday in central Seoul, calling for the overthrow of the military dictatorship in Myanmar and support from Koreans for Burmese democracy.

Taking turns in groups of nine people due to Covid-19-related attendance restrictions, 100 people participated in the relay demonstration, including laborers and students. The groups took turns shouting slogans denouncing the coup d’état.

“My family attends protests every day back at home. I cannot just sit back and do nothing, so I came out to the demonstration here,” said one 42-year-old Burmese woman who moved to Korea after marrying a Korean.

Burmese residents of Korea have been holding demonstrations since Feb. 6 four times a week after the Burmese military seized control of Myanmar on Feb. 1, following a general election in which the National League for Democracy (NLD), led by Aung San Suu Kyi, won by a landslide.

Aung San Suu Kyi brought international attention to the pro-democracy movement in Myanmar during the 1990s as she campaigned for democratic reform. She spent nearly 15 years in intermittent house arrest between 1989 and 2010. In 2015, she led the NLD to victory in Myanmar's first open election in 25 years.

Protests in Myanmar have turned increasingly violent and deadly since the Burmese military seized control and passed a year-long state of emergency. According to the UN Human Rights Office, 18 people were killed after the military used live ammunition to break up protests across Myanmar on Feb. 28.

Some Burmese residents who attended Sunday’s demonstration noted Korea’s history gives inspiration to the people of Myanmar protesting against the military coup.

A 24-year-old Burmese student who attends a Korean language program in Seoul said, “A lot of Burmese people are aware of the history of democracy in South Korea. We were really touched by the movies '1987' and 'A Taxi Driver.'"

The student added, “I want to draw Koreans’ attention to the situation in Myanmar. I’m worried about my family every night because there is a daily internet blackout between 1 a.m. and 9 a.m.”

Jeong Beom-rae, 55, who organized the committee that runs the protests, said, “30,000 Burmese people work or study in South Korea. This shows that Korea’s international stature has risen and that Korea should not turn a blind eye to the plight of the people of Myanmar.”