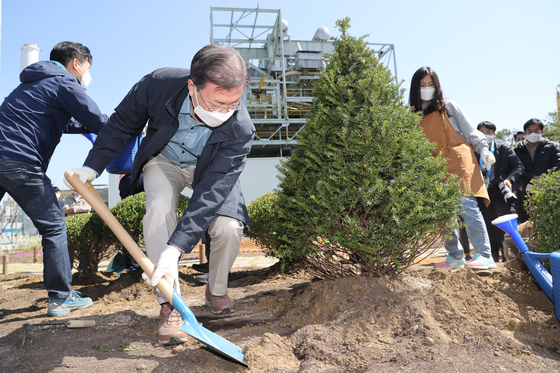 President Moon Jae-in on Monday plants a tree at the Seoul Power Station in Mapo District of western Seoul for an Arbor Day ceremony. [YONHAP]


President Moon Jae-in on Monday planted a tree at an Arbor Day event in a campaign to promote his vision for Korea’s carbon neutrality by 2050.

According to the Blue House, the site was specifically chosen for its symbolic significance. The power plant in Mapo District, western Seoul, started its operation in 1930 as the country’s first coal-fired electricity generation facility. Following major overhauls in the 1980s, the plant no longer uses coal or heavy fuel oil. The underground thermal plant is currently using liquefied natural gas, and the ground site was transformed into a park.

“A coal plant produces electricity, but it emits too much greenhouse gas and fine dust, hurting the environment,” Moon told the students. “It means a lot that the site of an old coal plant became a park and we planted trees here.”

Moon reiterated the administration’s vision of accomplishing carbon neutrality by 2050. “By 2050, we plan to build 3 billion more trees to absorb more carbon emissions,” he said.

According to Choi Byung-am, head of the Korea Forest Service, the plan to plant 3 billion trees includes a project of planting 300 million trees in North Korea.

Moon made an ambitious pledge in a National Assembly speech in October 2020 that Korea, an economy heavily dependent on fossil fuels, will go carbon neutral. “Together with the international community, we will actively respond to climate change and aim for carbon neutrality by 2050,” Moon said at the time.

Moon said Monday that plating trees also is an important way to reduce fine dust in the city. He said forest areas in Seoul have fine dust levels about 40 percent lower than urban centers.

According to the Blue House, Moon planted a Korean box tree, which is a symbol of endurance and patience. The box tree was chosen to demonstrate the president’s will to overcome the pandemic.