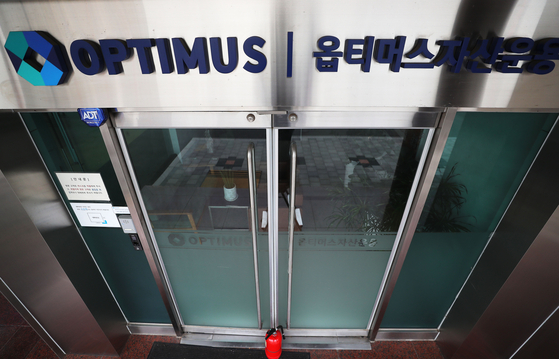 
Prosecutors announced Wednesday they have raided the home of a former director of the Financial Supervisory Service (FSS) to investigate allegations that Optimus Asset Management received protection from powerful government officials to cover up its fraudulent operations.

The economic crime investigation team of the Seoul Central District Prosecutors’ Office said the residence of the former FSS director, surnamed Yun, was raided on Tuesday. Yun was also summoned and questioned as a suspect, the prosecution said.

The raid and questioning were part of the ongoing investigation into financial fraud allegedly committed by the hedge fund. Over the past months, the prosecution has been investigating alleged fraud committed by the private equity firm. Optimus had solicited funds worth over 1.2 trillion won ($1 billion) from about 2,900 investors, promising a high-yield return by mainly investing in state-run companies. It invested heavily in high-risk projects, such as private real estate firms and lenders, while offering fabricated reports to the investors, prosecutors said.

In June, Optimus suspended withdrawals from its funds, locking up most of the customers’ money. As financial regulators suspended the firm’s business, the prosecution started investigating the company.

In July, prosecutors indicted Optimus’s CEO Kim Jae-hyun and other executives on investment fraud charges. Despite suspicions that Kim and his partners aggressively lobbied the government to keep the sinking business afloat, the prosecution has been recently accused of not looking into the allegations until this week.

Quoting unnamed sources in the prosecution, the JoongAng Ilbo reported that Kim had told investigators in June that Yun — who in 2018 was a director of the FSS — introduced him to top executives of major banks. In return, Kim gave cash bribes to Yun, Kim was quoted as saying during the interrogation.

Yun, who retired from the FSS last year, is currently standing trial on separate charges. In July, Yun was convicted of helping companies and individuals to get illegal loans in return for kickbacks. He has appealed.

According to the sources, Yun denied the latest accusation that he had received bribes from Optimus.

The prosecution and financial authorities are facing criticism that they moved unusually slowly in the Optimus probe, prompting opposition lawmakers to question a possible tie between the fraudulent hedge fund and powerful politicians and government officials. It took four months for the prosecution to raid Yun’s home and question him after obtaining a statement from Kim in June.

According to the National Assembly’s recent audit of the FSS, the watchdog was conspicuously generous to Optimus, although its inspection discovered that the hedge fund had insufficient liquidity in reserve.

According to Rep. Yu Eui-dong of the main opposition People Power Party (PPP) on Tuesday, the FSS wrapped up an inspection on Aug. 30, 2017, on Optimus and concluded that the firm did not have enough capital. The FSS, however, waited 112 days to submit a proposed corrective measure to the Financial Services Commission, effectively buying nearly three months for the firm.

Rep. Yu said it was extraordinary for the FSS to move that slow. From 2015 until this year, the FSS spent an average of 58 days to issue warnings or corrective measures to asset management companies after its investigations concluded that they needed to improve liquidity.

During the 112 days in 2017, the FSS appears to have aggressively helped Optimus to avoid shutdown. FSS officials offered multiple options to rescue the hedge fund to its CEO, Yu said, urging the prosecution to expand its investigation into the Optimus’s suspected illegal lobbying activities. 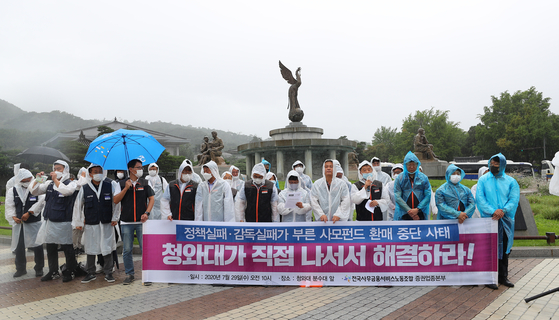 In this file photo, the Korean Finance & Service Workers' Union members hold a press conference outside the Blue House on July 29, 2020, and demand that the Blue House resolve the financial fraud scandal of Optimus and other private equity funds. They said poor oversights of financial regulators are responsible for the fraudulent operations of the funds. [YONHAP]


As the opposition party pressured the prosecution to get to the bottom of the scandal, President Moon Jae-in on Wednesday said the Blue House will fully and speedily cooperate with the investigation, presidential spokesman Kang Min-seok said.

Moon’s remark was made after a former presidential aide was summoned as a witness in the National Assembly’s audit.

According to the National Assembly’s National Policy Committee, the ruling and opposition parties agreed on Tuesday to call a former assistant secretary to the president as a witness in the lawmakers’ audit of the FSS. The former Moon aide, surnamed Lee, is a lawyer and the wife of Yoon Seok-ho, a senior executive at Optimus.

According to National Assembly sources, Lee is expected to attend the audit session of the FSS on Oct. 23.

Suspicions have been raised that Lee had played a key role in Optimus’s attempts to lobby the government and politicians to cover up its fraudulent operation.

After the FSS started an investigation into Optimus in April, Yoon told Kim that he would ask his wife, who was working in the Blue House at the time, to stop the probe, a former executive of Optimus and Kim told the JoongAng Ilbo. Lee worked as an assistant secretary in the office of the senior presidential secretary for civil affairs from October last year till June this year.