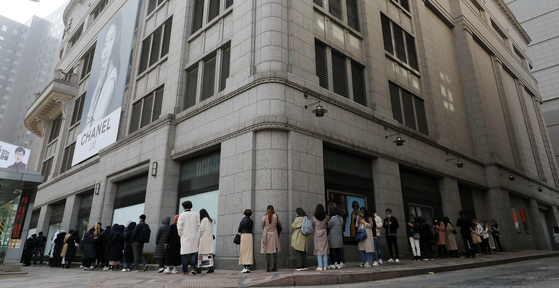 
“One day, my teaching assistant [TA] walked in with a Louis Vuitton backpack,” said Kwak Geum-joo, a psychology professor at Seoul National University.

“Since I knew that TAs only get paid a few hundred thousand won (a few hundred dollars) a month, I was shocked and asked, ‘How did you afford that?’ My TA replied, ‘I saved up for years, without spending on food and other things, because I wanted it so much.”

Luxury brand items were once considered to be something for wealthy middle-aged people, or at least younger people with high-paying jobs. But in recent years, people in their early 20s and even teens are splurging on luxury brands.

According to Hyundai Department Store, one of Korea’s largest department store chains, luxury shoppers in their 20s have been steadily on the rise. The number grew by 27.5 percent in 2018 and 28.8 percent in 2019, then surged in 2020 by 37.7 percent despite Covid-19’s negative impact on most other industries. 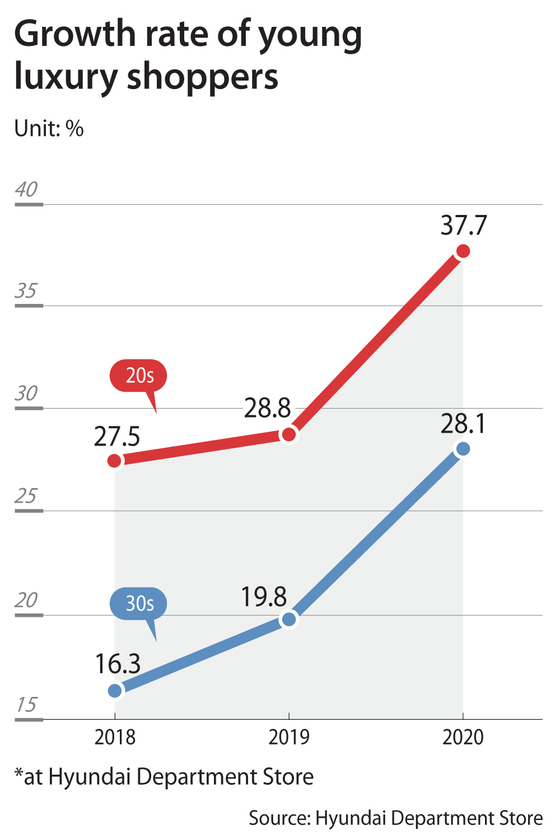 
“In terms of the luxury market, the right word may be ‘thanks to’ the pandemic rather than ‘despite’ it,” said Sung Tae-yoon, a professor of economics at Yonsei University.

“It’s called ‘revenge spending,’” Kwak said. “Covid-19 is limiting our everyday activities; we can’t go to restaurants as much, can’t travel, so people need to compensate with some source of joy. Since they can’t spend on much else, people are willing to pay more and buy a luxury version of any item. Thinking ‘it costs less than travelling abroad’ also justifies the spending.”

The fever for luxury is not limited to high-income professionals, as seen from the anecdote about Professor Kwak’s TA. Even if younger people do not have a sizeable amount of disposable income, they are willing to save up and spend on luxury goods.

According to a 2020 survey by Alba Cheonguk, a website for part-time jobs, 83.3 percent of people in their 20s paid for luxury items by saving their wages from their part-time or full-time jobs, as opposed to the common misconception that their wealthy parents pay for them.

“Interestingly, today’s luxury craze does not necessarily correlate with socioeconomic classes,” said pop culture critic Kim Heon-sik. “We usually think only upper-class people with money to waste buy luxury products, but that’s not the case for most millennials and Gen Zs. They will gladly survive on ramen so they can spend whatever they’ve saved on luxury items. That’s become normalized.”

For those whose budgets still won't stretch despite their deficient diets, secondhand shopping allows them to acquire luxury items for more “reasonable” prices.

A similar tote bag at an official Gucci store would have cost around 1.5 million to 1.9 million won.


“I think many college students own at least one luxury bag they can wear on special occasions,” Chun said. “Although I don’t go out much because of Covid-19, the self-contentment of knowing that I own something luxurious is what matters. It’s a reminder of why I work so hard and save money.”

Chun says she is satisfied with her purchase and is willing to hunt for more secondhand luxury items in the future.

“For a luxury brand bag, 400,000 won was a steal. Secondhand deals are a reasonable way to join in on the luxury trend.”

Scrolling through secondhand marketplace apps such as Bungae Jangteo and Danggeun Market, posts selling pre-owned luxury goods are plentiful. According to Bungae Jangteo, listings including keywords “Louis Vuitton” increased by 98.7 percent, “Chanel” by 53.61 percent, “Hermes” by 57.53 percent and “Prada” by 41.07 percent in the past year. The price range varies; one Hermes bag was posted at 25 million won on Danggeun Market.

A YouTube video of an 18-year-old high school student showing luxury items he recently bought. These kinds of videos have become their own genres, called “unboxing” and “haul” videos, in which predominantly young YouTubers show off luxury goods they recently bought. [SCREEN CAPTURE]


Teenagers are no exception to this fad. According to the aforementioned Alba Cheonguk survey, 33.6 percent of teens said they would spend their Korean Thanksgiving allowances on luxury items.

“Teens are just as stressed out as adults by the pandemic,” said Kwak.“They can’t go to school normally and thus have to deal with academic stress alone. So they also relieve stress by spending."

When asked why they purchase luxury goods, teens answered that they did not want to “fall behind on trends” (18.3 percent) or “be the only one without a luxury item” (17.4 percent).

“Teenagers are especially conscious of how their peers view them,” Kwak continued. “That’s a major trait of adolescence in general. When they see their friends buy luxury products, it’s hard for them to resist imitating them, even if it’s financially burdensome.”

A YouTube video of an 18-year-old high school student on a luxury shopping spree. [SCREEN CAPTURE]


Indeed, YouTube and social media are full of temptation for teens. One video uploaded on YouTube features an 18-year-old high school student buying a Chanel jacket, Dior shirt, Louis Vuitton shoes, Gucci scarf and more in a single shopping spree. These kinds of videos have become their own genres, called “unboxing” and “haul” videos, in which predominantly young YouTubers show off luxury goods they recently bought. 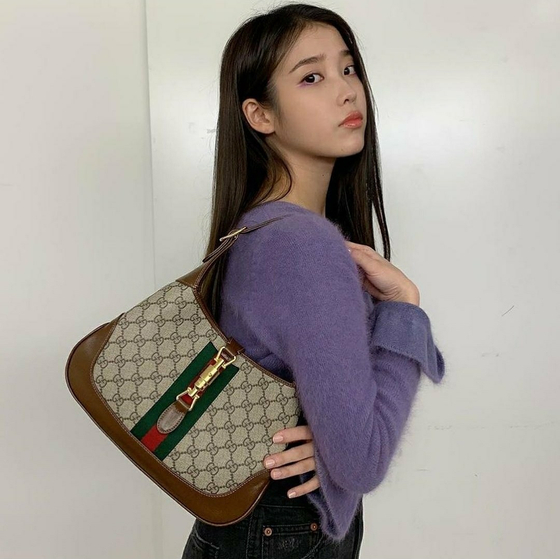 
Luxury brands were once known to only hire actors or professional models for their advertisements. In the past few years however, this custom has completely changed.

“The public used to not recognize K-pop idols as real musicians and didn’t take them seriously,” said Kim. “Their image was not high-end enough for luxury brands. But now the status of idols has changed. Their popularity reaches global audiences and wields immense influence on their fans, who are mostly teenagers. Teen fans will buy a product solely because their favorite idol promotes it. Not many would do the same for regular models.”

“Teens may not have income right now, but once luxury brands acquire their loyalty, they will potentially be clients for life and expand the market. That’s why luxury marketing targets teens nowadays.” 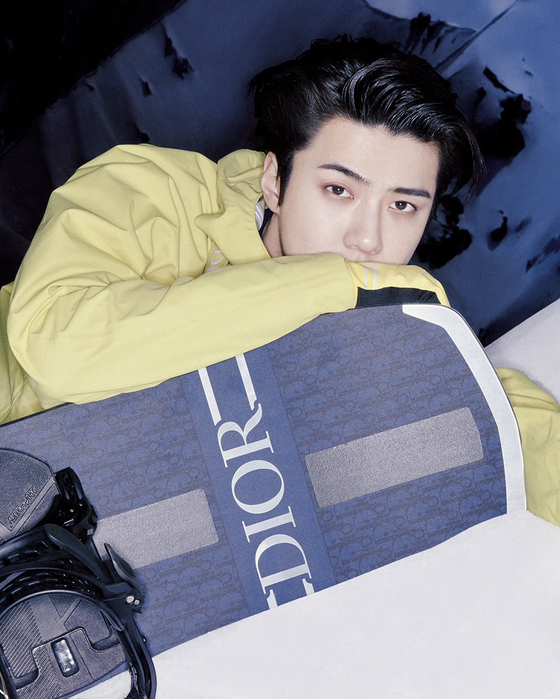 
A high school senior surnamed Choi told the Korea JoongAng Daily that she feels this phenomenon in everyday life.

“Since I started high school, I’ve been seeing more and more of my classmates wearing luxury brand cardigans or shoes with their school uniforms,” she said. “They especially invest in items they can show off easily, like wallets or shoes with huge logos on them.”

“Most girls in my class have lipsticks from Yves Saint Laurent or Dior. K-pop idols advertise them, so they’re called ‘HyunA lipstick’ or ‘Sunmi lipstick,' and so on. They cost around 40,000 to 50,000 won per tube, which is more affordable than luxury bags or clothes. I own a few too.” 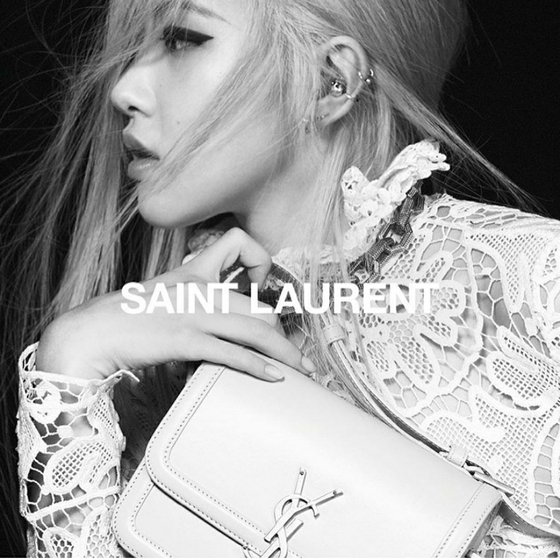 
While some raise concerns that this trend encourages excessive spending and vanity, experts say it’s neither positive nor negative per se.

“Luxury items are simply one of many products we consume, and it’s a personal choice to buy them. We can’t say it’s necessarily good or bad,” said Sung.

“If someone works hard to pay for a coveted luxury item, and gets immense joy and satisfaction out of it like my TA, that’s actually a healthy thing,” Kwak said. “But buying luxury products for the sake of keeping up with others, when they don’t even give you joy, is not wise; especially if it’s an impulse buy. Just be careful not to spend beyond your income or get in debt.”

“Remember, the joy of buying is short, but the pain of paying is long.”