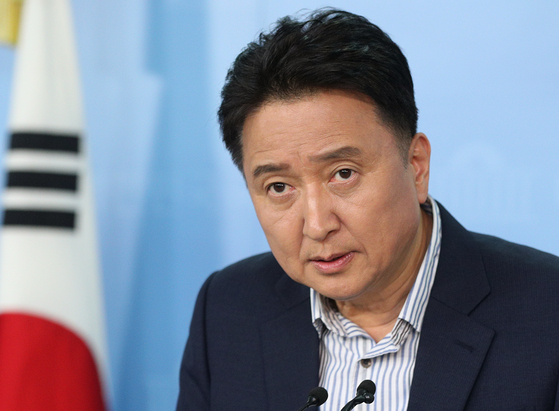 
Kim Young-hwan, a former four-term lawmaker, said Monday that he has surrendered his national merit as a pro-democracy activist because he was embarrassed by former comrades’ attempts to reap more benefits.

In a post on his Facebook on Monday, Kim, 65, said he and his wife have returned their state-issued certificates for having participated in the Gwangju Democratization Movement. “We have sent them by mail to the Ministry of Patriots and Veterans’ Affairs,” he wrote. 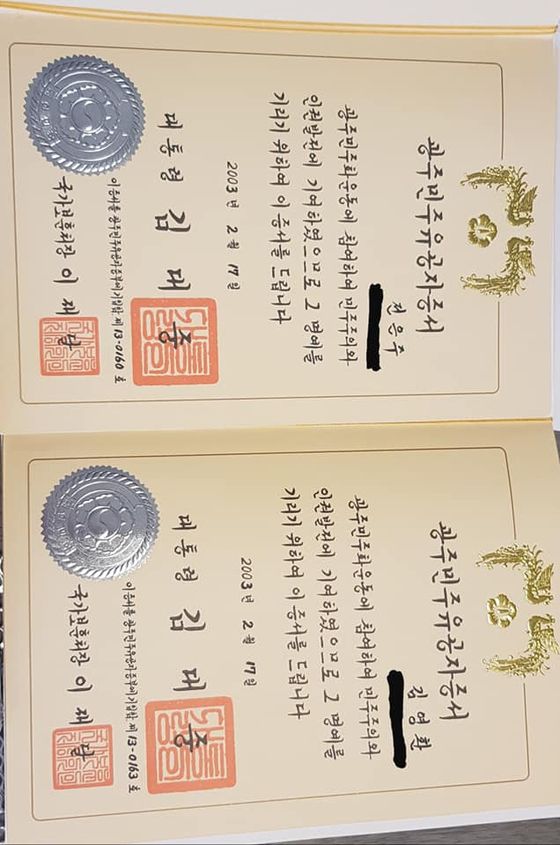 A photo of certificates, issued by former President Kim Dae-jung to recognize the merits of Kim Young-hwan, right, and his wife in the Gwangju democratization movement, is posted on Kim's Facebook. Kim said he recently returned the honors to protest the ruling party's attempt to offer more special treatments to former democracy activists and their families. [JOONGANG ILBO]


Kim said they made the decision after 73 liberal lawmakers, including Rep. Sul Hoon of the ruling Democratic Party (DP), had proposed a bill to award more benefits to democracy fighters and their family members. The bill, designed to offer education, job, medical, loan and housing support, was submitted to the National Assembly on March 26.

The bill drew fierce criticism for offering extravagant benefits to activists and their families. Fueling the criticism, many of the lawmakers who sponsored the bill were former student activists. Rep. Sul withdrew the proposal on March 30.

Kim said he felt angry and sad as he observed the former activists’ hypocrisy, the regression of democracy and the resurgence of privilege and foul play in recent years.

In 1977, Kim, then a student at Yonsei University, was first imprisoned for 20 months for participating in a democratic movement against Park Chung Hee’s authoritarian rule. Kim was released from jail in 1979 and then participated in the Gwangju democratic uprising against Chun Doo Hwan’s junta in 1980, leading to imprisonment once again.

In 1995, he was recruited by not-yet-President Kim Dae-jung and entered politics. He won his first lawmaker seat in 1996 and was re-elected three more times. He and his wife were officially credited by the Kim administration in 2003 for their contributions to the Gwangju Democratization Movement.

Kim left the DP and joined the People’s Party in 2016. In 2020, he joined the conservative and centrist groups’ political alliance and later became a member of the United Future Party, a predecessor of the current People Power Party. He ran as the opposition candidate in the April 2020 general election but lost.

In a phone interview with the JoongAng Ilbo on Monday, Kim further criticized liberal politicians for having disgraced the sacrifices made by democracy fighters.

“I have always considered my past as an honor, but former student activists have recently become a new type of social establishment,” Kim said. “And yet, they tried to create a new law to offer themselves more benefits, and that is a shame. We were compensated enough. More benefits will trigger a fairness issue that won’t be acceptable to the public.”

He also told the JoongAng Ilbo that the people are furious about the series of double standards that student activists-turned-politicians have exhibited since President Moon Jae-in took office in 2017.

“The liberal politicians think they are the definition of justice and democracy, so they act high-handedly,” Kim said. “They don’t look back on themselves to check if they were intoxicated by power and privileges. After they won the elections, their belief became stronger.”