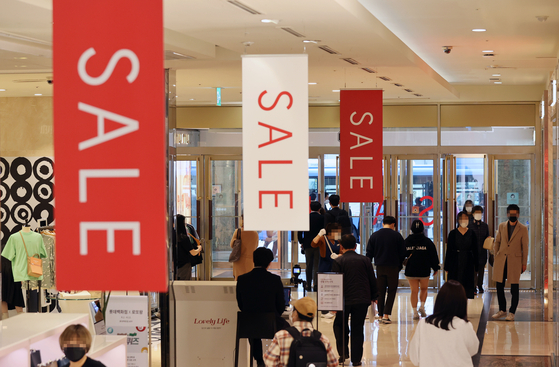 
Department store sales are up so far this year as more people are venturing out and shopping.

Sales of camping gear and golf products have increased, though baseball product and swimwear sales are sluggish as social distancing remains the norm.

Revenue at Lotte Department Store from Jan. 1 through March 28 jumped 20.4 percent on year.

By the types of household, spending by single households jumped the largest, at 42 percent.

"Young single households are seen to have tried to compensate themselves through spending after feeling deprived from the recent spike in the real estate prices," said Choi Seong-chul, a spokesperson for Lotte Department Store. 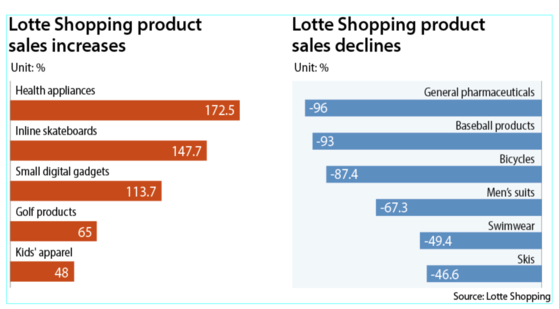 In the first quarter, they stayed 53 minutes per visit on average, up 18 percent from the first quarter last year when the Covid-19 just broke out. More people signed up at the department store culture centers to take classes, with 66 percent of all classes having been booked up.

"The tendency to stay longer once they visit and buy more expensive products has grown stronger," Choi added.

Not every category of products sold better than last year.

Sales of kids' clothes improved, as students started returning to school. Sales of products for group sports declined, while those that can be played alone increased.

Sales of general pharmaceuticals fell 96 percent on year, baseball products minus 93 percent, bikes minus 87.4 percent, men's clothes minus 67.3 percent and swimwear minus 49.4 percent.

The company's revenue in March rose 74.1 percent on year, led by luxury products, which surged 100.2 percent, and women's fashion, up 85 percent.

Shinsegae Department Store did not reveal the figures, but an analyst report from Daishin Securities estimates on-year revenue in February jumped 34 percent and, in March it grew 60 percent.