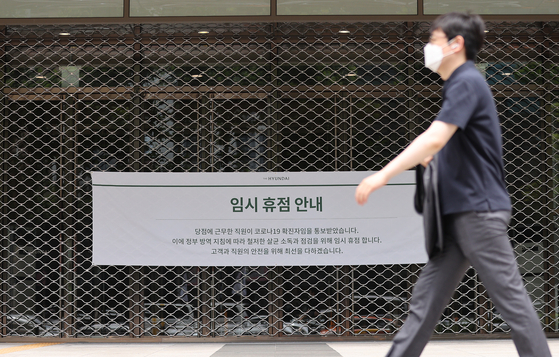 A sign at Hyundai Department Store’s branch at Coex, Gangnam, southern Seoul, on Wednesday that reads the store is temporarily closed after some workers tested positive. [NEWS1]


Department store branches were temporarily closed in southern Seoul after employees at the locations were found to have been infected with Covid-19.

The closings are reminiscent of the early days of the outbreak, when retail outlets were being hurriedly shut one after the other as new cases cropped up around the city.

Hyundai Department Store at Coex, Gangnam, southern Seoul, was temporarily closed after two workers employed in the basement food floor, which has a supermarket, food court and individual food shops, tested positive on Sunday and a cluster was identified.

The two people infected were not employees of the department store but worked for independent retailers that rented space within it.

The department store closed the shops where the first two infections were identified and others nearby on Sunday immediately after the positive results were confirmed. It shut completely on Monday, opened again Tuesday morning only to shut again that same day at 3 p.m. It will remain closed through Thursday and plans to reopen Friday.

In total, 47 infections were identified as of Tuesday.

Seoul city government said the department store complied the quarantine measures, but some workers at the store continued to stay at work despite feeling unwell.

The company said it checks body temperatures of all workers and requires them to self-diagnose their condition daily.

Hyundai Department Store “did not make employees with symptoms work,” said Kang Jun-mo, a spokesperson for the company. “We believe they may have had slight symptoms that they could not feel.”

Lotte Department Store closed its branch in Yeongdeungpo District, western Seoul, on Tuesday after a worker at a store tested positive.

Around 40 people who had been in contact with the employee were tested.
Shinsegae Department Store closed its store in Gangnam last Friday after two workers at the checkout counter tested positive.

Department stores say they are complying with the rules, like disinfecting the stores daily, but they’re finding it difficult to respond to the pandemic as the number of cases soar.

“As the number of Covid-19 infections increases centered in the metropolitan areas, traffic to offline channels is projected to partially decline in July,” said analyst Ahn Ji-yeong from IBK Securities.

Major department stores in the city generate 5 billion won to as much as 10 billion won in sales daily from at a single branch, according to local media reports.

“Covid-19 could take a toll on department stores at a concerning level again like last year, if the social distancing restriction rises to or above Level 3 because it psychologically affects people to stay at home,” said Hong Seong-min, a spokesperson for Shinsegae Department Store.

Greater Seoul is under Level 2 social-distancing rules. But Prime Minister Kim Boo-kym on Wednesday said the government will take the city to Level 4 if the number of virus cases does not drop within the next two to three days.