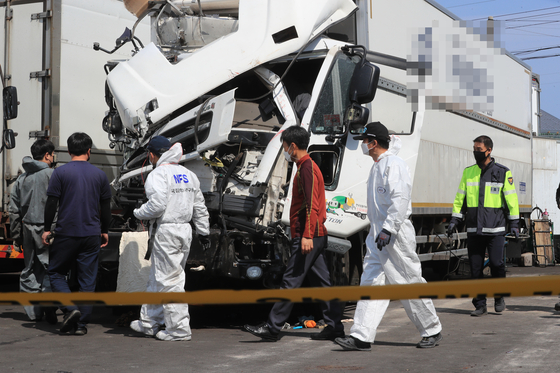 Police and National Forensic Service officials inspect the scene of the accident in Jeju on Wednesday. [YONHAP]

At 5:59 p.m. Tuesday, a 4.5-ton truck en route from Sancheon-dan to Jeju City careened down a road and collided with two buses and a 1-ton truck stopped at the Jeju University intersection in Arail-dong.

Police and fire authorities said a mechanical failure was to blame for the truck's uncontrollable descent.

The impact pushed one of the buses over the guard rail, sending it tumbling 3 meters (10 feet) below, where it came to a stop.

The larger truck was stopped by the guard rail, its front end mangled beyond recognition.

Three out of the 60 passengers in the two buses were killed. The casualties include a woman in her 70s, a man in his 20s and another man in his 30s.

Three other passengers were seriously injured. They were transported to nearby Jeju National University Hospital along with 36 others who received minor injuries.

Fire authorities dispatched 50 personnel to the site of the accident both to transport those hurt in the accident to the hospital and to repair the site.

Police are collecting information from witnesses and passengers to determine the precise circumstances and timeline of the accident. Police are also questioning the driver of the 4.5-ton truck to figure out whether he had been drinking before the accident.