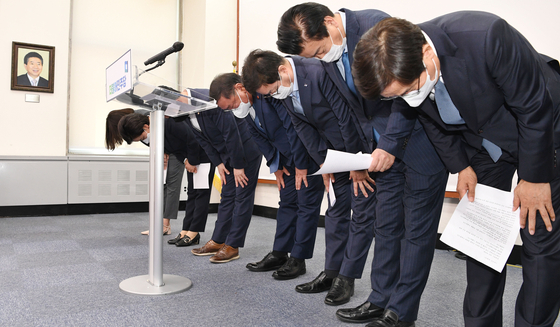 Members of the ruling Democratic Party's Supreme Council bow Thursday after announcing their decision to resign to take responsibility for the party's crushing defeats in Wednesday's by-elections. [YONHAP]


Following his ruling party’s crushing defeats in by-elections in Seoul and Busan, President Moon Jae-in Thursday said he recognized the public’s discontent and vowed to make better progress in his war against corrupt manipulation of the real estate market.

“I accept the people’s censure with heavy heart,” Moon was quoted as saying by his spokesman Kang Min-seok Thursday morning. “I will run state affairs with a humble attitude and heavier responsibility.”

Moon said he will put all possible efforts into satisfying the public in areas such as overcoming the Covid-19 pandemic, helping the economy recover, and stabilizing livelihoods.

His somber vow was in response to the ruling Democratic Party (DP)’s crushing defeats in the Wednesday’s 21 by-elections nationwide including mayoral races in the country’s two largest cities, Seoul and Busan.

Wednesday’s by-elections were crucial political tests for the DP and PPP ahead of the presidential election next March.

Top DP politicians on Thursday stepped down from leadership posts to take responsibility for the by-election defeats. Rep. Kim Tae-nyeon, the floor leader of the party who has been serving as  acting chairman, and other members of the Supreme Council resigned.

The DP said it will elect a new floor leader on April 16. It will also advance the schedule for a national convention to elect a new chairman from May 9 to May 2.

“The leadership admitted that the biggest reason for the defeat was the lack of fairness and sense of justice demonstrated by key members of the party and the administration,” Rep. Choi In-ho, spokesman for the DP, said. “The emergency leadership will draw up principles on how to deal with such cases of double standards.”

The DP elected its Supreme Council, including Chairman Lee Nak-yon, last August. Lee, who served as prime minister in the Moon government from May 2017 to January 2020, resigned from the post in March to run for the presidency but still chaired the DP’s unsuccessful by-election campaign.

Voters turned against the DP less than a year after they gave it 180 seats in the 300-member National Assembly in April 2020 by-elections. Frustration with real estate issues were a main factor.

The public was angry about skyrocketing home prices and the administration's repeated failures to cool them -- and the means used, which included much higher real estate taxes. A massive real estate corruption scandal also had an impact: employees of a state-run developer bought land based on inside information about development plans. Double standards by top politicians in their own real estate ownership also wounded the DP.

According to the Korea Real Estate Board’s report in March, the average price of an apartment in Seoul was 904 million won ($809,789) in February, 55.1 percent higher than in August 2017, shortly after Moon became president.

In another analysis by Kookmin Bank, the average sales price of an apartment in Seoul increased 36.4 percent from February 2017 to last February. During the same period, the average jeonse or long-term rental deposit price for a Seoul apartment went up by 18.8 percent.

Over the past four years, the government announced 25 sets of measures to cool off both sales and rent prices, but they made little progress. The measures, including punitive taxes and tighter standards for mortgages, also fueled public frustration, as many homeowners ended up paying higher taxes and prospective buyers had trouble financing purchases.

Just weeks before the by-elections, the Ministry of Land, Infrastructure and Transport  raised the average assessed value of apartments nationwide by 19.08 percent for 2021. That is a major surge compared to the 5.99 percent increase last year. It was the sharpest increase in 14 years. That figure is used as a base for taxes on properties including the comprehensive real estate tax.

The comprehensive real estate tax is a national tax targeting expensive residential properties and some types of land. It is separate from property taxes levied by local governments. The tax is levied yearly on apartments with assessed values over 900 million won. It also applies to individuals who own multiple apartments with a combined assessed value exceeding 600 million won.

“I have lived in this neighborhood for 20 years, but I paid the highest taxes this year,” said a 73-year-old voter in Seoul's Seocho District. “My family owns just one home. We are growing old and our incomes are getting smaller, and this tax burden is just too severe.”

The ruling party did particularly badly in Seoul’s wealthiest districts of Gangnam, Seocho and Songpa, and real estate taxes were foremost on their voters' minds, say analysts. PPP’s Oh won 73.5 percent of the votes in Gangnam and 71 percent in Seocho. In Songpa, Oh scored 63.9 percent.

“I don’t think we will ever see another case of such overwhelming support for a mayoral candidate,” said Lee Jun-ho, head of polling company STI. “Whether it’s real or hypothetical, the voters’ resistance against the new tax policy clearly benefited Oh.”

Park Dong-won, a political consultant, also said voters chose Oh because they were upset about the bigger bills from the comprehensive real estate tax. “During last year’s general election, the DP said it will consider lowering the tax, but did not follow through,” he said. “That was critical.”

Oh won all districts of Seoul, indicating that the comprehensive real estate tax is a critical issue for all homeowners in the capital city.

“Homes in some neighborhoods were not expensive enough to pay the comprehensive real estate tax in the past, but they recently became taxable,” said Kim Hyung-joon, a political science professor at Myongji University. “And more are expected to come into the net. The voters had a reason to elect a candidate who will stop that.”

The people were also angry about ethical scandals involving DP politicians and government officials and the double standards of Moon aides and DP politicians in regards to real estate holdings. On March 29, Moon fired Kim Sang-jo, who was in charge of his real estate policies, following media reports that he jacked up the rent on an apartment he owns just two days before new rent control laws took effect.