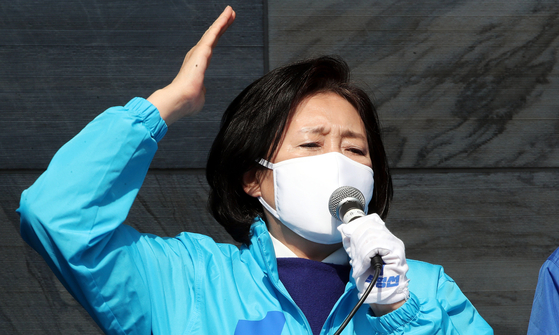 
The National Election Commission (NEC) launched an investigation into whether the ruling party's campaign in the Seoul mayoral by-election broke the law by sending a text message claiming its candidate was leading rivals in early voting.

Mayoral by-elections in Seoul and Busan are scheduled for Wednesday, and early voting took place on Friday and Saturday.


The average turnout for the early voting period in those by-elections and some other local elections was 20.54 percent, the highest ever in the history of a by-election. Seoul’s turnout was 21.95 percent.

A text message was sent from the headquarters of Park Young-sun’s campaign to its campaign workers on Monday, claiming that Park had "won" the early voting.

“Because of your sincere appeals and supporting activities, the hearts of the voters of Seoul were moved and we won the early voting,” the message said. “But this is no time to rest. We have two more days before the by-election on April 7. Please meet, persuade, telephone and distribute leaflets to more people to promote Park.”

“We have received a complaint that the text message is a suspected violation of the law,” an NEC official said. “We are looking into the matter.”

Clause 1 of Article 108 of the Public Official Election Act says, “No one shall publish or report, by quoting, the details or results of a public opinion poll that makes it possible to predict the approval rating of each political party or the successful candidate in an election, during a period between six days before the election day and the closing time of balloting on the election day.” 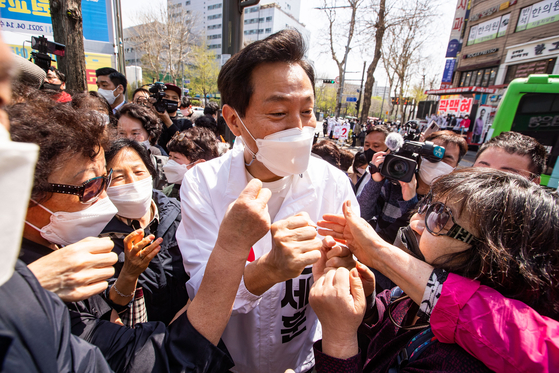 People Power Party's Seoul mayoral candidate Oh Se-hoon is surrounded by the people at a stumping event in Nowon District of Seoul. [YONHAP]

The ruling Democratic Party (DP) maintains that it "won" the early voting. Rep. Choi In-ho, a senior spokesman for the party, claimed Monday that DP candidates won early voting in Seoul and Busan.

A political consultant also made the controversial remark last Friday that Park had won the early voting.

Park Si-young, head of polling company WinGKorea Consulting, hosted a meeting between DP candidate Park and some YouTube content creators on Friday. During the event, Park Si-young said the DP appeared to have won the early voting. “Election observers glanced at the markings on ballots and informed DP lawmakers about the outcome,” he said. “It seems that the DP has won.”

The PPP filed a complaint with the NEC on Sunday urging an investigation of WinGKorea's Park. Article 167 of the Public Official Election Act states that secrecy of voting shall be ensured.

Article 241 of the act says anyone who infringes on the secrecy of voting or publishes details and results before voting is closed shall be punished by up to three years in prison or a fine of up to 6 million won ($5,356).