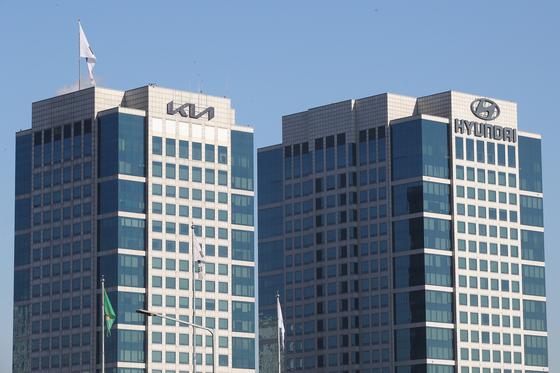 Kia Motors and Hyundai Motor's headquarters in Yangjae-dong in Seoul in February 2021. [NEWS1]


Several high-ranking Hyundai Motor officials are reportedly being investigated for profiteering through insider information in regards to a collaboration with Apple on future car development, which was later canceled.

On Sunday it was reported that the Korea Exchange (KRX), the stock market operator, had turned in its preliminary results on suspected insider trade violations committed by the automaker’s executive to the Financial Services Commission (FSC).

KRX has been looking into the allegations since February.

Either the FSC’s capital market investigation team or the Financial Supervisory Service will conduct further investigation.

Some 12 executives at Hyundai Motor are accused of selling their stocks in the Korean automaker before the news of the project with Apple being canceled was made public.

The executives are reported to have pocketed 830 million won ($740,000) by selling 3,402 shares of Hyundai Motor using the undisclosed information.

The Korean automaker’s stocks surged sharply when news hit that Apple had chosen Hyundai Motor to develop its autonomous vehicle.

On Jan.8 the automaker’s stock rose more than 19 percent. Hyundai Motor’s stock has risen 26 percent so far this year. That’s a sharp increase considering that during the same period, the Seoul main bourse index rose 7 percent.

On Jan. 20 Kia Motors through a regulatory filing announced that while nothing has been determined yet, it is currently reviewing cooperation with numerous overseas companies in regards to self-driven electric vehicles.

While Kia Motors did not mention Apple by name, the statement raised suspicions that it could be Kia working with Apple.

On the same day Hyundai Motor’s stock reached as high as 277,000 won per share, a record high for the company.

However, Hyundai Motor’s stock has been falling since Feb. 8 when the Korean automaker officially announced that it was not in talks with Apple on developing the autonomous vehicle.

It was reported that Apple decided to pull the plug citing Hyundai Motor’s lack of discipline in keeping its joint development from the public.

On Feb. 8 the automaker’s shares declined 6.2 percent compared to the previous day.

The investigation, whether conducted by the FSC or the FSS, is expected to take between five to six months.