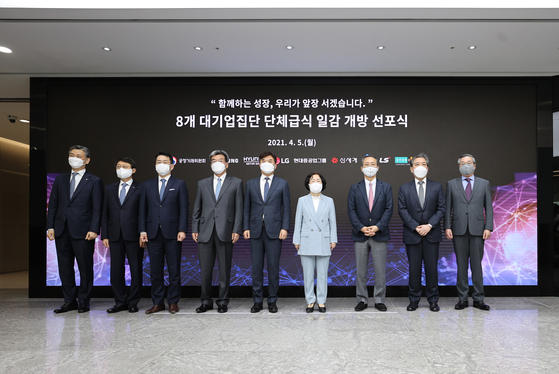 
A Fair Trade Commission (FTC) announcement that conglomerates will now allow small and midsize companies to operate their in-house cafeterias has left office workers with a bad taste in their mouth.

The FTC on April 5 announced that eight chaebol would select in-house cafeteria operators based on competitive bidding. The announcement ends the tradition of major conglomerates hiring their own affiliates to run in-house cafeterias.

The new changes are supposed to make room in the market for smaller players, but chaebol employees aren't happy. Their concern isn't opening up the market, it's a good lunch.


“The government is even intervening in company workers’ dining,” read an anonymous online post on Blind, a social media application specifically for working employees.

Other posts worried about the quality of the food, saying that in-house cafeterias will now taste worse than army canteens.

However, the posts were not entirely negative, as some are anticipating that the entry of new businesses will spark competition.

“Factory workers have no choice but to eat at on-site cafeterias because it is hard to go to other restaurants outside,” read an anonymous post on Blind. “Workers have been continuously complaining that we either need to change the distributor or adopt a competitive bidding system because there is no competition even though the food we get is low quality.”

For conglomerates, catering is increasingly important as employees become more discerning, so continuing to work with big name food distributors could be a better choice.

The in-house cafeteria market has been divided based on size — large distributors were in charge of conglomerate cafeterias and smaller operators worked with smaller companies. Due to this fundamental difference, many say small food distributors won't be able to scale up their service to fill the jobs as intended.

“Even though small catering services meet the serving requirements and hygiene standards of big food distributors, it is doubtful whether they can provide the same level of customer service,” said a spokesperson for one of the big food distributor companies.

“We are not forcing companies to partner with SME food distributors or preventing conglomerates from working with their affiliates,” added the FTC. “This is a decision by the eight conglomerates, choosing to open the door for more jobs.”