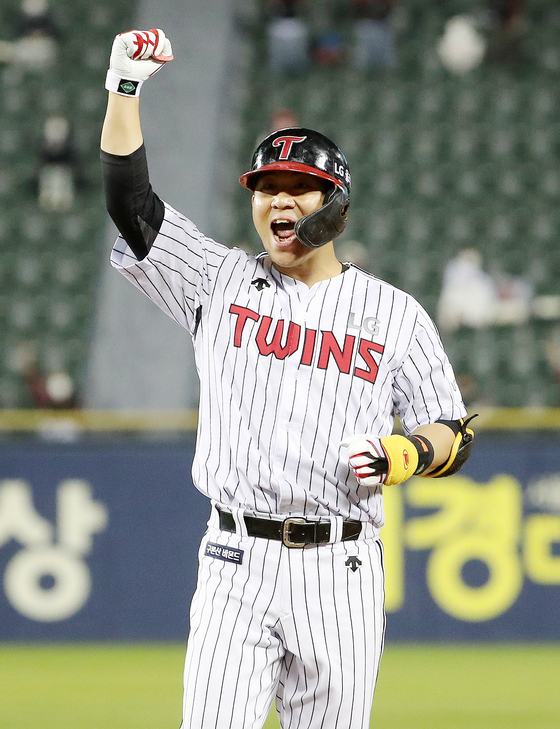 Kim Min-sung of the LG Twins cheers after hitting a double in the sixth inning against the SSG Landers in southern Seoul on Friday. [NEWS1]


The LG Twins find themselves on top of the the KBO ranking after one full week of play, with five wins and two losses to take a one-game lead over the three second-place teams.

The NC Dinos, Doosan Bears and SSG Landers all share second place with four wins and three losses each.

The Twins rose to the top on the back of some strong pitching performances, with recent import Andrew Suarez leading the way with wins in both of his starts so far this season.

Such a strong performance sees Suarez topping all three of the major pitcher rankings: ERA; wins, tied with Eric Jokisch of the Kiwoom Heroes; and strikeouts, at 18.

It hasn't solely been strong pitching that has led the Twins to the top, with 28 runs scored across seven games showing LG has been strong at the plate as well. Although the Seoul club has lacked the explosive at-bats that some clubs have already displayed this season, the Twins have relied on consistency more than fireworks to get the job done. The Twins beat the Landers two games to one over the weekend.

The Dinos and Bears tying for second won't come as a big surprise for most KBO fans, as the two teams have rarely strayed outside of the top half of the table over the past decade. The addition of the Landers, who finished the 2020 season in ninth place, is good news for new owners Shinsegae, although its still far too early to see if things have dramatically changed for the better.

The batting prowess that led the Dinos to the 2020 pennant and championship titles is on display again this season, with Aaron Altherr tied at the top of the home run rankings, alongside Choi Jeong of the SSG Landers with four, and Yang Eui-ji leading on hits with 13, followed by teammate Na Sung-bum with 11.

The Dinos swept the Kia Tigers over the weekend, jumping up the table after dropping their first full series to the Lotte Giants last week.

The Landers have also seen some explosive at-bats. As well as Choi Jeong, new addition Choi Joo-hwan has hit three home runs and has a 0.357 batting average over seven games.

The Bears don't have a single strong performer to pin their success on, although Park Kun-woo's 0.393 batting average puts him in sixth place overall. The Bears lost their series against the Hanwha Eagles 2-1 over the weekend, but picked up a huge 18-1 win on Saturday.

Doosan is clearly still struggling to plug some holes in its infield caused by free agency last season, with Sunday's 3-2 loss the fault of a poor showing on defense more than a strong offensive performance from the Eagles. 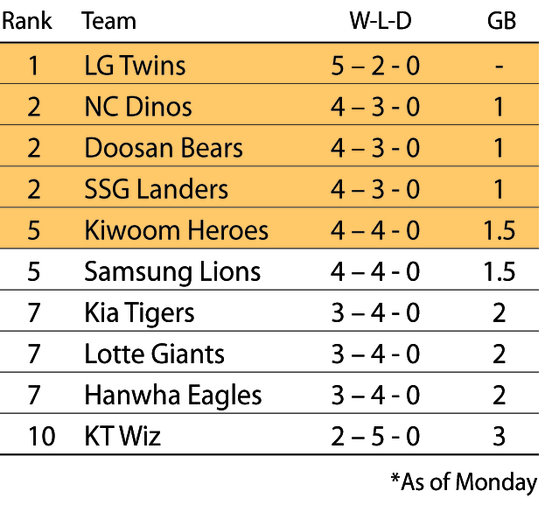 
The Heroes and Samsung Lions are tied for fifth at four games and four losses each, while the Tigers, Giants and Eagles share seventh with three wins and four losses. The Wiz sit in last place with two wins and five losses, a disappointing start to the season for a team that finished 2020 in third place.

The KBO returns on Tuesday as the Wiz face the Bears at Jamsil, southern Seoul, the Dinos face the Landers in Incheon, the Eagles travel to Daegu to take on the Lions, the Giants visit the Tigers in Gwangju and the Twins face the Heroes at Gocheok Sky Dome in western Seoul.