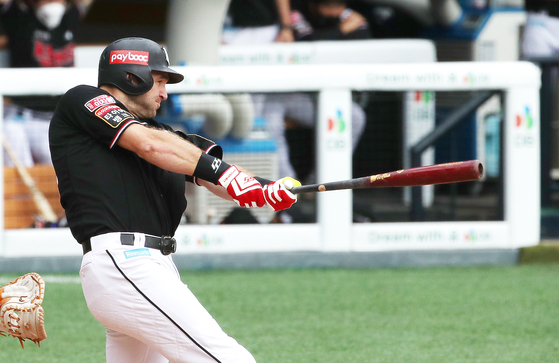 Jared Hoying of the KT Wiz brings home two runners with a hit in the fourth inning against the LG Twins and Jamsil Baseball Stadium in southern Seoul on Sunday. [NEWS1]


The KT Wiz extended their lead at the top of the KBO over the weekend, sweeping a two-game series against the LG Twins to sit four games clear in first place.

The Wiz beat the second-place Twins decisively over the weekend, taking an 11-1 win on Saturday before returning with an even more conclusive 11-0 repeat performance on Sunday. The series pushed the Wiz further out front while the Twins fell back in line with the Samsung Lions on points, but with significantly more games in hand.

The third-place Lions tied their series with the seventh-place Doosan Bears, winning the first game 11-4 but then dropping the second 6-5. The Kiwoom Heroes in fourth place fared better, beating the sixth-place SSG Landers 9-2, 10-8.

The NC Dinos round off the top five, tying their series with the eighth-place Lotte Giants. The Giants won the first game 8-2 before the Dinos bounced back to take the second game 9-3.

The final series of the weekend saw the ninth-place Kia Tigers take on the tenth-place Hanwha Eagles. The Eagles won the first game 6-2, before tying the second game 5-5.

The KBO started playing two-game series at the start of September and will continue to do so until the regular season ends in October. Earlier in the week, the Landers, Giants and Lions all won their Thursday-Friday series, while only the Lions took both games of the Tuesday-Wednesday series.

Despite not picking up an out-right win in either of their earlier series, the Wiz have won seven of their last 10 games to lead the KBO. The Twins and Lions each maintain a .600 winning percentage over the last 10 games, with only the Landers and Giants staying above .500.

With only a month and a half left before the postseason, the Wiz, Twins and Lions have likely locked in their spots in the playoffs. Kiwoom, NC and SSG remain in a tight fight for the remaining two spots, with only one game separating the three teams, while the Doosan Bears and Lotte Giants could still be in contention.

This season marks a remarkable fall from grace for the Dinos and Bears, who have dominated the KBO for the last few years. The Dinos are the reigning KBO champions and reigning pennant winners, while the Bears have finished in either first or second place for the last six years. So far this year, neither team looks guaranteed to reach the playoffs.