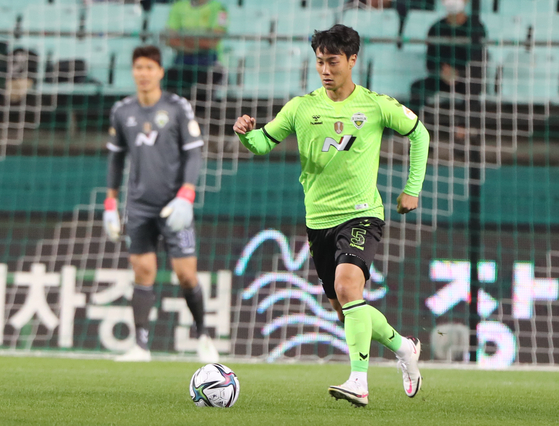 Paik Seung-ho, right, appears for the first time in a Jeonbuk Hyundai Motors jersey in a match against Incheon United at Jeonju World Cup Stadium on Sunday. [YONHAP]


Jeonbuk Hyundai Motors held on to the top spot in the K League 1 table for another week, extending their streak to nine games without a single loss.

The North Jeolla side rounded off the week by trouncing Incheon United 5-0 on Sunday at Jeonju World Cup Stadium in Jeonju, North Jeolla.

Han Kyo-won opened the scoring for Jeonbuk in the 41st minute, with Lee Seung-Gi piling on just three minutes later to give the team a 2-0 lead going into the break.

Lee and Han both found the back of the net again in the second half, with Modou Barrow compounding the victory with a fifth goal scored during injury time at the end of the second half.

With the victory, Lee joins the K League's 50-50 club, referring to players with a record of more than fifty goals and fifty assists, adding two goals and one assist in this game.

If Jeonbuk weren't unstoppable enough already, Paik Seung-ho, a midfielder that came up through the Barcelona youth system before playing in the Spanish and German second divisions, joined his new club on the field for his K League debut on Sunday.

Kim Sang-Sik, Jeonbuk manager, was named K league Manager of the Month for March as Jeonbuk’s undefeated record continues. Kim has been with the club as a player and coach since 2009.

Song Min-kyu opened the scoring during the first half, marking his fourth goal during this season. Lim Sang-hyub added the second in the 78th minute.


Daegu struggled offensively, with forward Cesinha absent due to a hamstring injury. As a result, Daegu fell to eleventh place on the table.

It was Serbian striker Fejsal Mulic who found the net twice — once during the first half and once in the second. Caught up with his emotions, he tore off his jersey in celebration — an act forbidden by FIFA— forgetting he had already been booked in the first half.


Jeju United beat the Suwon Samung Bluewings 2-1 on Sunday. The three points took Jeju to seventh on the table while the Bluewings fell to sixth.


Suwon FC is continuing to struggle with a hard season, losing once again, this time 1-0 to Ulsan Hyundai FC. Neither team moved in the table, with Suwon staying at 12th and Ulsan at second.