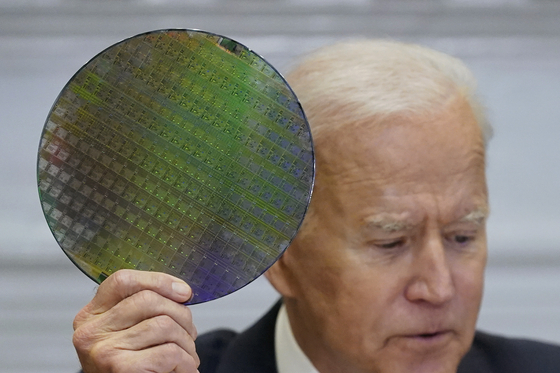 U.S. President Joe Biden holds up a silicon wafer as he participates virtually in the CEO Summit on Monday in Washington. [AP]

In a virtual summit held on Monday, Biden talked to leaders of semiconductor, automobile and other tech companies. Samsung Electronics President Choi Si-young, who heads its foundry business division, participated along with senior executives of competitors TSMC and Intel.

Biden emphasized the strategic importance of semiconductors for the U.S. as it vies for technological supremacy, especially against China, amid a global chip shortage.

"These chips, these wafers … batteries, broadband — it’s all infrastructure. We need to build the infrastructure of today and not repair the one of yesterday,” Biden said.

The virtual meeting was intended to discuss “the importance of encouraging additional semiconductor manufacturing capacity in the United States,” according to a White House statement, on top of finding solutions to the chip shortage in the automotive field.

Some of the participants were quick to respond to the U.S. government’s request, with Intel CEO Pat Gelsinger vowing to start producing chips for car makers in an interview with Reuters following the meeting.

This puts pressure on Samsung, which has yet to finalize a $17 billion deal to expand chip fabrication capacity in Austin, Texas near an existing facility that produces chips based on older manufacturing process.

The Texas Comptroller of Public Accounts advised the state government that Samsung Electronics is entitled to a property tax cut of at least $285 million for 15 years if it builds the $17 billion factory, following the company’s request for $1 billion in tax breaks for 20 years.

However, a recent suspension of operations at the existing Austin chip plant due to freakishly cold weather in the region has complicated Samsung’s decision.

“Austin had been considered the preferred location for a new foundry factory thanks to its proximity to the plant and generous tax benefits,” said a source in the semiconductor industry.

“But the freeze and the subsequent shutdown for about a month could make Samsung question the U.S. city’s ability to manage or restore electricity and industrial water,” the source said.

Although Samsung’s filings to Texas outlined its interest in building a new manufacturing facility, a spokesperson for the company maintained that it is reviewing “different locations” including Arizona, New York and Korea.

Compounding the matter is the absence of Vice Chairman Lee Jae-yong, who is in jail after being convicted of bribing former President Park Geun-hye.

Industry insiders say that the leadership vacuum delays key investment decisions at a time when Samsung’s competitors are shelling out billions in new facilities in the U.S.

TSMC plans to invest $100 billion over the next three years to increase production capacity while Intel committed $20 billion to building two chip fabrication plants in Arizona.

Against this backdrop, President Moon Jae-in has invited Samsung and SK hynix for a high-level meeting on April 15 to discuss the chip shortage issue.