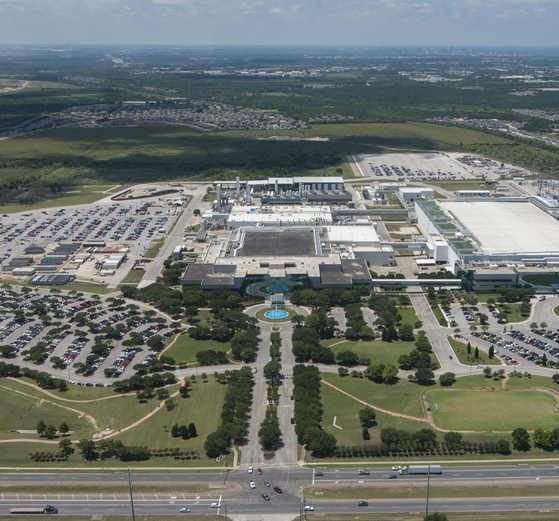 
Samsung Electronics has chosen the city of Taylor, Texas, as the site for its planned $17 billion investment and is set to sit down with the city's authorities Wednesday to discuss the construction of a new chip plant.

A source at the Suwon, Gyeonggi-based chipmaker told the JoongAng Ilbo that Samsung has recently finalized the mega-sized investment decision.

“So far, [Samsung Electronics] has thoroughly reviewed four to five locations for the ‘Star Project.,’” said the source who wished to remain anonymous.
“What I learn is that [Samsung] finally chose Taylor after taking into account investment incentives and geographic conditions,” the source said.

Local media outlets in Texas reported earlier this month that a big announcement is set to be made during the meeting between the Williamson County Commissioners Court, Taylor City Council and Samsung.

The proposed agenda is to “discuss, consider and take appropriate action on a resolution in support of Samsung Austin Semiconductor LLC's selection of Williamson County as the location of its new $17 billion facility," according to a post on the website of the county where Taylor is located.

Taylor City Mayor Brandt Rydell is expected to execute a wide range of agreements required for the Samsung project including a tax abatement agreement and a development agreement, according to media outlet Taylor Press.

According to a document filed with the Texas Comptroller office, Samsung plans to break ground by the first quarter of 2022 with the aim of operating by the final quarter of 2024.

The tech giant had considered several U.S. locations including in New York, Arizona and the Manor Independent School District, near the company’s existing Austin plant.

The Manor site was considered the frontrunner in the race because of its proximity to both the existing plant and suppliers of semiconductor parts.

However, that plan was abandoned following the temporary shutdown of the Austin factory in February due to a power outage, a glitch which led to 400-billion-won ($350 million) worth of losses.

An industry insider said that the event turned Samsung off the Manor site.

“If you set up the new facility in a location away from the Austin plant, it could cost Samsung more for the supply of water and electricity and the establishment of other infrastructure,” the source in the semiconductor industry said.

“But the advantage is that it can operate the line in a more stable manner,” he said, referring to the safer management of utility services in times of urgency.

Samsung Electronics announced last month that it will invest 240 trillion won over three years in its most important businesses for the future: chips, telecommunications, biopharmaceuticals, robotics, artificial intelligence and quantum computing.

Some 180 trillion won will be invested in Korea and the rest outside of the nation.