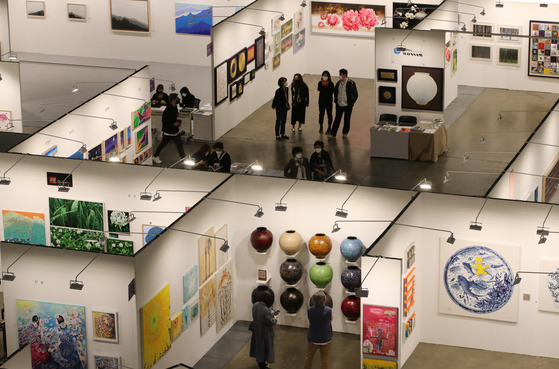 Visitors look at artwork at the 2021 Busan Annual Market of Art on April 11, which was held at Bexco, or the Busan Exhibition and Convention Center. Some 40,000 works of art from a total of 176 art galleries were exhibited at the fair. [SONG BONG-GEUN]


"Please don't think that buying artwork is only for the rich. Just enjoy it," said a 39-year-old office worker, who introduced herself as an art collector.

The local art market is booming recently as young Koreans tired of splurging on luxury goods are now turning to artwork.

According to The Art Market 2021, a report published by Art Basel and sponsored by UBS, more than half of those who spent over $1 million purchasing artwork last year were in their 20s and 30s.

Transaction volume online accounted for 25 percent of purchases, a three-fold increase from the previous year.

People can purchase and sell artwork at art galleries, art fairs and art auctions and online.

Bhak Young-duk, an artist who ran Galerie Bhak for over 28 years and featured works by Kim Chang-yeol and Nam June Paik, recently rebranded the gallery. It's now known as BHAK.

The gallery is now run by Bhak's 28-year-old son Bryan Bhak with a new location in Hannam-dong, central Seoul.

"Sales have been increasing recently mainly driven by people aged between 20 and 40," said the younger Bhak. "In the past, people in their 20s didn't really purchase artwork, and people in their 30s and 40s on average used less than 5 million won when buying an artwork.

"But now young collectors are not afraid of purchasing artwork that costs some 10 million won to 50 million won." 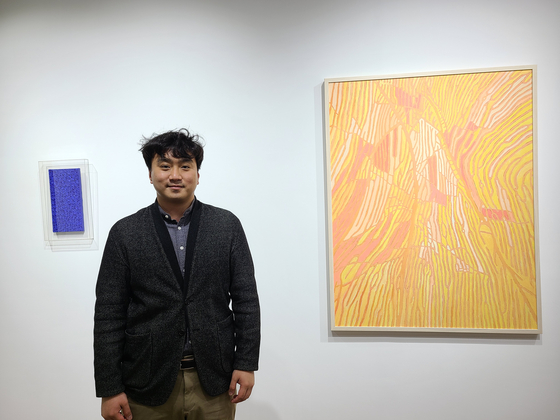 Bryan Bhak poses for a photo at his gallery BHAK in Hannam-dong, central Seoul. [LEE SO-AH]


The interior design of the BHAK gallery has changed a lot, according to Bhak. The gallery has band performances regularly, has expanded its online services and has strengthened communication with people online.

"Our gallery offers customers not only various artworks but also chances to experience additional activities such as fashion shows, movies and performances," Bhak added. "We look forward to reconstructing the interior design of the art gallery, departing from the conservative atmosphere that the art industry has had all the while."

Unlike older people, young people are familiar with cultural activities such as artwork, exhibitions, musicals and operas. They have experienced them while they grew up, and are not afraid of spending money on them.

"Tickets to an art exhibition cost some 10,000 won, and it's not an activity that is only open to the rich," said a 29-year-old office worker. "It's not like all people have to purchase some hundreds of millions of won worth of artwork. Spending some 1 million won to 2 million won on art is just same as spending on sports or other leisure activities."

"The way of thinking that purchasing artwork is exclusively for the rich is so anachronistic."

More Koreans now consider artwork as a way to decorate their homes.

"I used to hang wedding pictures and family pictures in the living room, but these days I feel like a nice painting is better for home decor," said Lee, who recently purchased 1 million won of art.

The 2021 Busan Annual Market of Art, which was held at Bexco, or the Busan Exhibition and Convention Center, April 9 to 11 generated a buzz. According to the Galleries Association of Busan, the organizer of the art fair, the sales probably hit a record high this year.

Some experts say artwork has been a good alternative to replace demand for luxury goods. 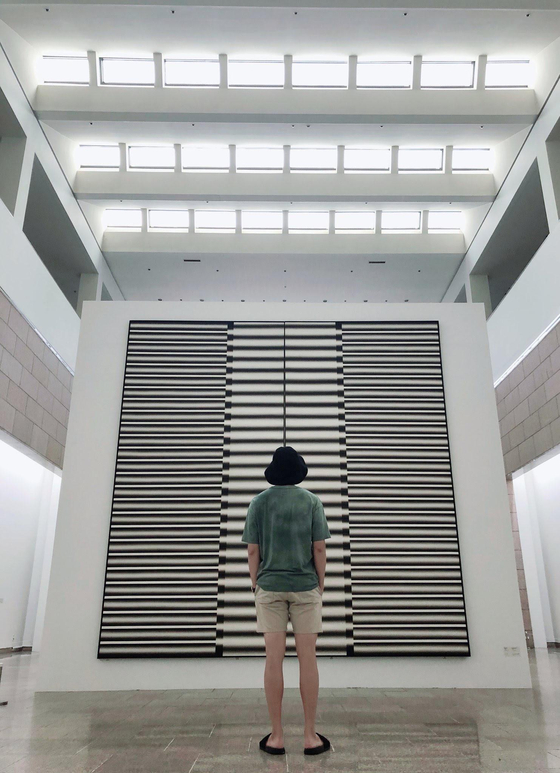 
A 35-year-old working mom, who lives in Seocho District, southern Seoul, said she feels better when spending money on artwork rather than luxury goods.

"Today, university students and even high school students own Gucci sneakers, Dior backpacks and Moncler padded jackets," she said. "A woman who is in her 30s and owns a Chanel bag? It's nothing."

"Unlike luxury handbags that decrease in value over time, artwork is something that I can enjoy for a long period of time," she added. "As the value of artwork may surge in the future as well, I feel like spending on artwork is more meaningful than spending on luxury goods."

According to her, she and eight friends formed a group to share information about artwork and visit galleries together. They visited Art Basel Hong Kong before the outbreak of Covid-19.

"Unlike older people who consider saving and humility as the greatest of virtues, young people accept showing off what they own," said Seo Yong-gu, a business professor at Sungshin Women's University. "Artwork is something that they can easily photograph and share via social media."

Many celebrities have been showing their love for art, and this has also been a driving force in the art boom.

The National Museum of Modern and Contemporary Art in Gwacheon went viral after RM of boy band BTS uploaded a photo in which he is viewing a painting. Kwon Ji-an, also known as singer Solbi, and actor Ha Ji-won themselves have become artists and their paintings have been sold for some tens of millions of won.

"Buying and selling artwork is very common in United States and China, but it seems like there has been a psychological barrier toward art in Korea," said La Jong-min, an artist who has also been working as video director. "More Koreans recently have been showing interest in enjoying new experiences, and sharing their experiences with other people."