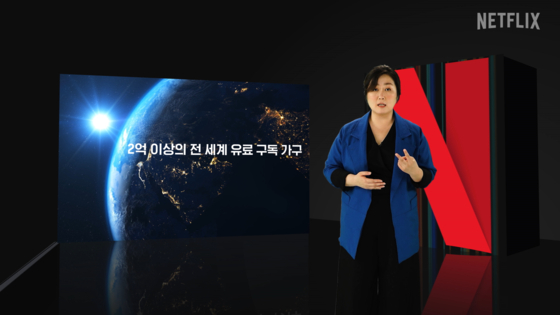 Kim Min-young, vice president of Netflix content in Korea and Southeast Asia, talks during a press conference on February 25. [NETFLIX]


Facebook and Netflix have disclosed their Korean financials for the first time ever following a change in the law.

Both companies did well in the market in 2020.

According to a financial statement filed by Netflix, the company's local revenue last year was 415.5 billion won ($368 million), up 123.5 percent.

Of total revenue, 96 percent of Netflix's revenue is attributable to subscription fees.

In 2020, Koreans paid 398.8 billion won in subscriptions to Netflix, up 127 percent from the previous year. Netflix had 3.8 million paid subscribers in Korea and 240 million globally as of December 2020.

Netflix invested in 770 billion won in Korean programming since 2016 and is planning to invest an additional 550 billion won this year amid the increase in subscribers.

"Korean content is the key to growth in the Asian market," said Kim Min-young, vice president of Netflix content in Korea and Southeast Asia during a Feb. 25 press conference.

With Korean Netflix originals such as season 2 of "Kingdom," "Extracurricular," and "Sweet Home" popular globally, the company plans to introduce "Space Sweepers," "Night in Paradise" and other series.

Netflix Services Korea and Facebook Korea are locally structured as limited liability companies (LLC), which have been exempt from public disclosure. After the amendment to the Act on External Audit of Stock Companies, LLCs were also obliged to go through external audit and publicly disclose their reports.

According to the amendment, all corporation and LLCs with business revenue of 50 billion won or more must comply.

Netflix was criticized last year by Korea lawmakers for not disclosing its revenue or profit despite earning sizable profits in Korea. The video streaming company vowed to release its financial statements.

"Starting from the first half, we will disclose the information in accordance with the Act on External Audit of Stock Companies," said Yeon Joo-whan, head of public policy office at Netflix Services Korea, referring to the first half of 2021.