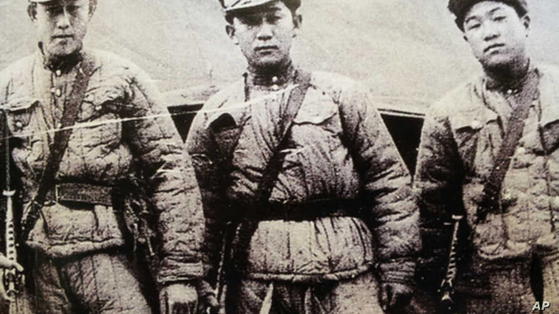 These Korea Liaison Office operatives were photographed dressed as Chinese soldiers before an infiltration mission during the Korean War (1950-53). [NATIONAL ARCHIVES]


Members of the Korea Liaison Office (KLO) will finally receive compensation for their service during the Korean War (1950-53) under a new law, according to the Defense Ministry on Tuesday.

The KLO conducted guerilla warfare and espionage operations under the United Nations Command during the Korean War.

Titled the Act to Compensate Irregular Servicemen During the Korean War, the law would remunerate irregular servicemen who were active in enemy territory from Aug. 15, 1948 –– the date when the Republic of Korea, or South Korea, was founded and the division of the Korean Peninsula was sealed –– to the end of the Korean War on July 7, 1953.

According to the Defense Ministry, surviving KLO members and their families number approximately 4,800 in total. Each individual will receive 10 million won ($8,900).

The KLO unit, also known as Unit 8240, was under the authority of the Supreme Commander for the Allied Powers (SCAP) in Tokyo and was responsible for infiltrating North Korean-controlled territory to collect information, conduct sabotage and carry out assassinations.

Most notably, the unit retook and lit the lighthouse on Palmi Island near Incheon, hours ahead of the successful amphibious United Nations landing in September 1950 which forced the North Koreans to retreat from South Korean territory.

The KLO was also unusual at the time because it recruited women, who were thought to draw less attention for their activities. Some 20 percent of the unit was comprised of female operatives.

Surviving KLO members and their families will be able to register for benefits under the law beginning on Oct. 13, when the law takes effect. Applications will be accepted for two years.

The new law comes 21 years after the unit’s sacrifices and contribution to the war effort was brought to public attention by National Assembly Rep. Kim Sang-ho in 2000.

However, critics say the measure is insufficient considering the sacrifices of the unit’s members.

KLO operatives will not be granted recognition as persons of national merit, which is customarily granted to individuals who fought in the war or died in battle, because they were not classified as Korean servicemen.

Surviving KLO members have long argued that they, too, deserve to be recipients of national merit.

Kim Sang-gi, chairman of the KLO veterans’ association, said, “All these years, the government has insisted that it could not compensate our service because we were part of the United Nations Command. Who do you think would accept such a small amount of money?”

Kim also pointed out that living KLO members who were involved in infiltration operations now number only about 100 individuals, over 80 years old.

“All we want is for the country to recognize that it made a mistake [in excluding us] and for it to treat us with the respect we deserve for the little time we have left,” Kim said.