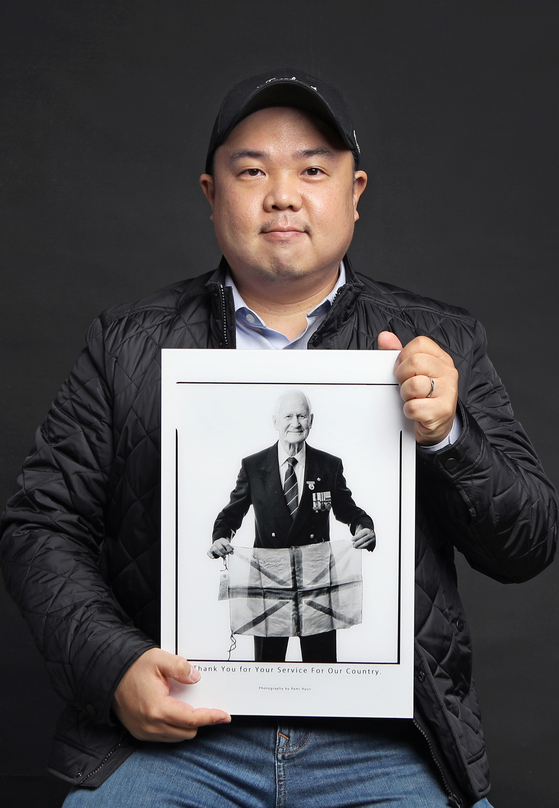 Photographer Rami Hyun, who's been taking pictures of foreign Korean War veterans since 2017, poses with one of his works — a picture of British veteran John Bowler — after an interview with the Korea JoongAng Daily at a studio in Gwanak District in southern Seoul. [PARK SANG-MOON]


For the last four years, Rami Hyun has been showing up on the doorsteps of foreign war veterans, knocking on their doors and asking to take their pictures.

This photographer, whose real name is Hyun Hyo-jae, has been taking pictures of Korean War veterans in the United States and Britain since 2017 as part of his project “Project Soldier.” He first began photographing soldiers in 2013.

“There was this movie I was designated to make to introduce army troops, and I happened to interview a sergeant who’d been serving in the army for 28 years,” Hyun said in a recent interview with the Korea JoongAng Daily. “He said that he was completely unashamed of his 28 years in the military but he was ashamed of himself as a father. He told me that his wish was to go on his first family trip when he's discharged from duty after two more years. That was so shocking to me.”

But Hyun soon learned that the sergeant’s story was nothing out of ordinary. So he decided to record the people in uniform whose services and sacrifices remain largely invisible to the public.

He was holding an exhibition titled “I Am a Soldier” at the National Assembly when an old man, who was not Korean, visited wearing a military uniform.

“He told me he was a Korean War veteran, and when he said that I momentarily saw a streak of pride and sparkle in his eyes,” Hyun said. “I was curious about why they were so proud to have fought in a country that’s not even theirs? I had photographed 2,000 soldiers at that time, but he was so different from other Korean veterans or soldiers. The pride that seem to radiate within him was so powerful. I wanted to find out, ‘why?’” 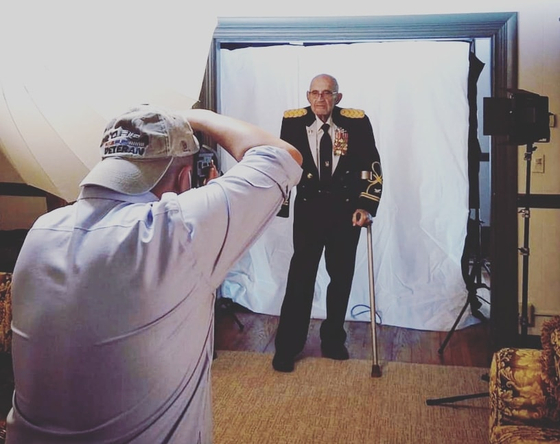 Rami Hyun is taking the picture of William Weber, a U.S. Army colonel who is a veteran of both World War II and the Korean War. [RAMI HYUN]


The encounter was the start of his project to document foreign war veterans in the United States and Britain. Due to language barriers, he’s mainly focused on these two countries, but he has also taken pictures of war veterans from the other 20 countries that fought in the Korean War.

Q. What’s the difference between local and foreign veterans?
A. Korean veterans have deep resentment for the sacrifices they made for their country. While foreign veterans also feel resentment, they see that Korea became a country of democracy and freedom because of their actions.

When the Korean War ended, there seemed to be no definite win [for either side]. When the foreign veterans returned home, they weren’t treated with the respect they deserved because they were considered to have gone there as part of police action as part of the UN forces, not as a part of military action. So foreign veterans were mainly forgotten about. But then Korea prospered — not only did it economically thrive but it became a country that they [the foreign veterans] had long dreamed about. Despite having their sacrifices ignored, these foreign war veterans felt proud that Korea became the free and democratic country they had fought for.

Korean veterans don’t feel that way. [From their perspective], they fought to save their country, but the country hasn’t really done anything for them, and young people today don't seem grateful for the sacrifices they've made.

Even if foreign war veterans aren’t respected in their home countries, at least they receive a huge welcome and feel appreciated when they come to Korea. Even in Korean textbooks, students are taught to be grateful for the service that foreign veterans provided. [Ironically enough], we don’t do that for our own veterans. 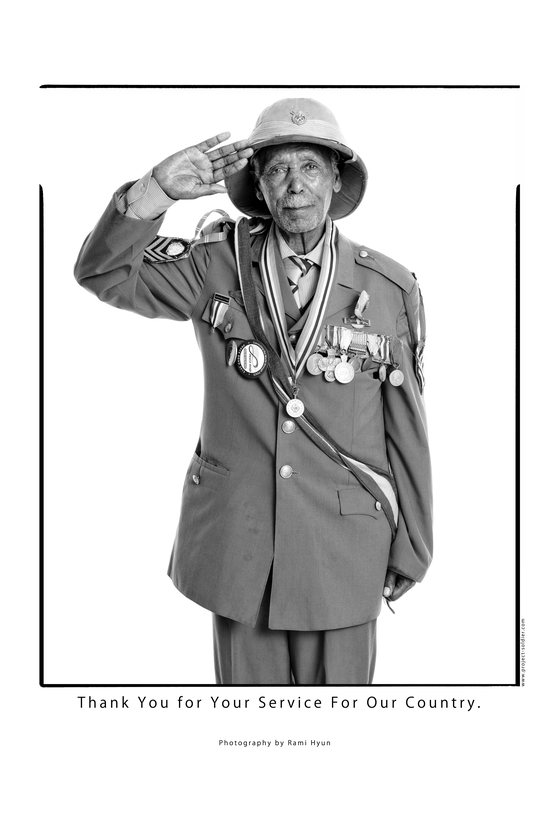 Q. What meaning does Korea hold for foreign war veterans?
A. Back then [during the Korean War], nothing. When they were here, the mountains were black because of explosions, and they told me it really felt like the end of the world. Geographically, Korea can get really hot and really cold, and they had difficulty adjusting to the climate. There are still many who can’t come to Korea [even now] because of the fear and PTSD. They know that it’s a safe country, but they can’t process that in their minds. In their minds, they’re still at war.

In spite of these feelings, they see that their service wasn’t in vain. They see that what they’ve done was the right thing. What they’re most proud of, is that the next generations are prospering thanks to their actions. Their sacrifices made it possible for a country called Korea to prosper. They tell me that even though [the war period] wasn’t long, it was the most worthwhile thing that they did in their entire lives.

What veteran William Weber told me was unforgettable. He said, he participated in the World War II to defeat the enemy, but participated in the Korean War to save people. He said, ‘a free person has a duty to recover and protect those who have lost or are in danger of losing their liberty.’ He, as a free person, as a professional soldier, fought in the war to protect the freedom that Korea was on the brink of losing. He says that the country doesn’t owe him anything but that it is now Korea's duty to protect the freedom of North Koreans. 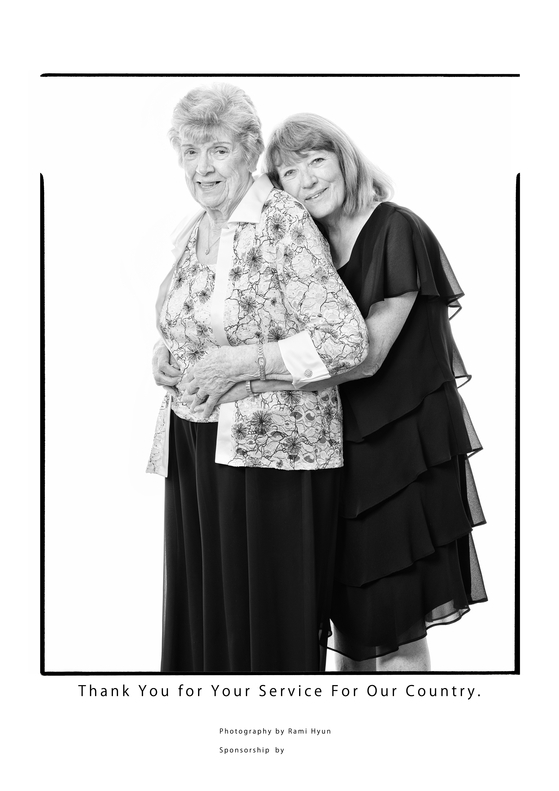 Veteran D.A. Creese-Harris who served in the U.S. Air force, left, and her daughter. [RAMI HYUN]

Q. How do you cover expenses?
A. It usually comes out of my own pocket. If I'm short for money, I sell one of my lenses, some of my work or take on temporary jobs.

I always think, ‘this will be my last trip,’ but there’s always another opportunity that arises, which is why I’ve been to the two countries 35 times [over the last four years].

What pushes me to come back is when the veterans tell me [after taking their photos] that at last they feel like heroes. Because when they participate in commemorative events, they are referred to as ‘one of them.’ But since they have their own individual shots, they take the photos as Korean War veterans. They are going back in time, some 70 years ago in their lives and taking a picture as a soldier. I see that when I take their photos, and see the pride in them.

And when I’m financially struggling, there was always a savior who would give me another plane ticket. For instance, I wasn’t supposed to make it to Britain last year, but a group of veterans collected money to buy me a plane ticket so I could bring a group photo that I took of them. I really thought last year was it, when I hurt my back [due to lugging around heavy baggage], my camera and lighting equipment broke, and basically, I was broke. I lost all motivation to go back. 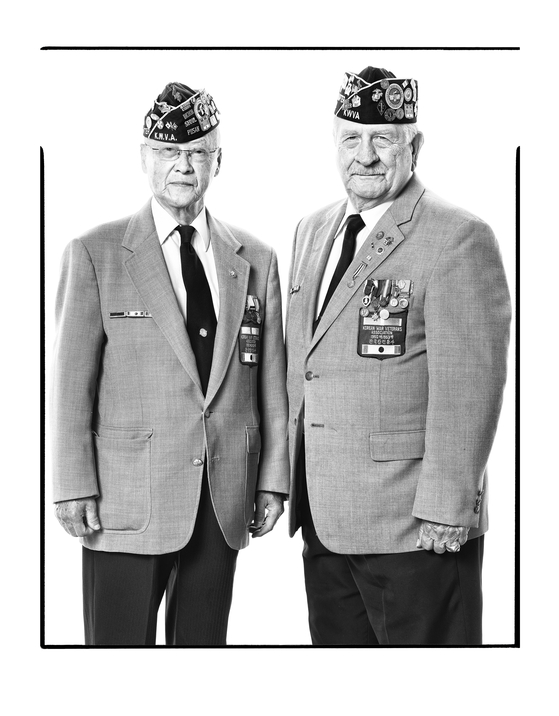 Q. But then your story went viral when you recently appeared on tvN variety show “You Quiz on the Block.” How was that experience for you?
A. That was the strangest thing. I mean, I’ve been saying the same thing for the last four years but no one was interested. Before, topics related to the Korean War seemed to to be only relevant to a specific generation or those with specific professions. But this person, Yoo Jae-suk [the host of the program], changed that. Especially for young people in their teens and 20s, they are now telling me about their grandfathers and I see that they are reaching out to each other and communicating.

One of the things that I’m hearing from people [after ‘You Quiz’], especially in their 50s, is that they’re sorry that they haven’t properly educated their kids about the sacrifice the veterans made for our country. They were too busy leading their own lives to teach them about history, which is why recording and remembering what they [the veterans] have done for us wasn’t a priority.

And what’s surprising after “You Quiz” is the gender proportion on my social media. Before, my followers and the comments were predominantly men, at a ratio of 9:1, but that has since changed to 6:4.

I’m still grasping the influence Yoo has on Korean society. But what I’m [also] learning is that in Korea, it doesn’t matter what I’m doing, it’s who says that it matters. In the U.S., it’s the other way around. It doesn’t matter who I am, what matters is what I do. 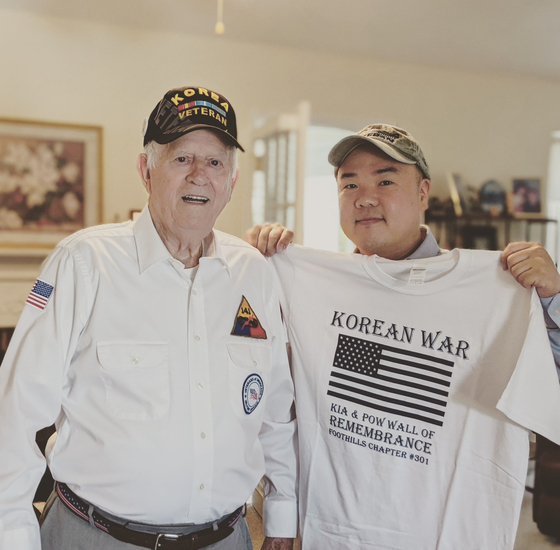 Rami poses next to Lewis Vaughn, who served IN the U.S. Forces in Korea. [RAMI HYUN]

Q. What is the final goal for Project Soldier?
A. Technically, this is part four of the Project Soldier, “Searching for Korean War Veterans.” I’m going to mainly focus on this for a while, until 2023, which will be the 70th anniversary of the end of the Korean War. I think [due to the influence of the ‘You Quiz’] I will now be able to visit more countries and find more veterans. I’m also planning to host an exhibition in 2023 to pay tribute to these soldiers. With that wrapped up, I’ll continue to work on my other project series, such as “I am a Soldier,” where I take individual photos of Korean soldiers on duty, “We are Soldiers,” which are group photos, “We are Soldiers’ Family,” which are family photos of soldiers and their families, and “Rescue & Search, Fire Fighter,” which documents firefighters and other people in uniform who devote themselves to our country.

The purpose of part four is to find and record as many Korean War veterans as I can. Our generation was lucky enough to be able to talk and hear what they’ve done but the next generation won't be. Only when we record what has happened does it become history, and that’s how it becomes the strength and pride of our nation.

Ultimately, Project Soldier’s purpose is to make it possible for people in military uniforms to be recognized for the service they provide for their country. I don’t believe that we appreciate what they’re doing for us enough. As a photographer, I hope to change that, by visually showing people a different side of soldiers.