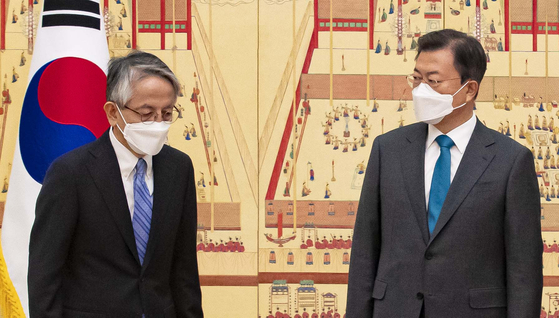 “At a Blue House meeting, the president ordered his aides to actively examine ways to bring Japan’s decision to release contaminated water from [the Fukushima] nuclear plant to the International Tribunal for the Law of the Sea,” Kang Min-seok, presidential spokesman, said Wednesday.

The office of the presidential secretary for legal affairs is working on Moon's order, a Blue House source said.

The Japanese government announced Tuesday that it decided in two years’ time to gradually release into the Pacific Ocean more than a million tons of treated wastewater from the Fukushima Daiichi nuclear plant .

An earthquake and tsunami on March 11, 2011 caused a meltdown at the nuclear plant. For the past decade, Japan has struggled with what to do with radioactive water stored in large tanks at the defunct plant from before and after the accident. The tanks are expected to be full by the summer of 2022.

Asked about reports that the United States and the International Atomic Energy Agency are supporting Japan’s decision, the Blue House source said he doesn’t want to comment on other countries’ stances. “The Korean government is considering various ways to respond to Japan’s decision,” he said. “Taking this issue to the International Tribunal for the Law of the Sea is one of them.”

Later in the day, Moon made unusually blunt remarks to Japanese Ambassador to Korea Koichi Aiboshi about his concerns. Moon made the remarks at a reception the Blue House hosted after a credentials-presenting ceremony. Three new ambassadors to Korea presented credentials to Moon including Aiboshi.

“I must tell this to you,” Moon was quoted as telling Aiboshi by Kang at the reception. “Korea has extremely serious concerns over Japan’s decision to release contaminated water from the nuclear plant into the sea because our geographic location is the closest and the two countries share the sea.”

Moon told Aiboshi to relay the concerns of the Korean government and people to his government.

Both the ruling and opposition parties condemned Japan for its decision on Wednesday.

“We denounce the Japanese government for making the decision without offering transparent information and a verification process,” said Rep. Do Jong-hwan, acting leader of the ruling Democratic Party (DP). “We won’t tolerate any action that harms the people’s health.”

DP Rep. Song Young-gil, chairman of the Foreign and Unification Affairs Committee of the National Assembly, said in a radio interview that he cannot trust Tokyo’s announcement that the release will be made safely. “The international community must create a monitoring team,” he said.

Another DP lawmaker, Shin Dong-kun, said, “It is very disappointing that the United States, our traditionally ally, sided with Japan.”

Rep. Joo Ho-young, floor leader of the main opposition People Power Party (PPP), said Japan should have consulted with neighboring countries and made a decision in cooperation with the international community.

The PPP also criticized the Moon administration for a diplomatic fumbling. “It is a more serious problem that Moon had not explained the situation to the people,” Rep. Park Jin of the PPP. “The government must lay bare what it discussed with Japan and what it did to stop the release.” 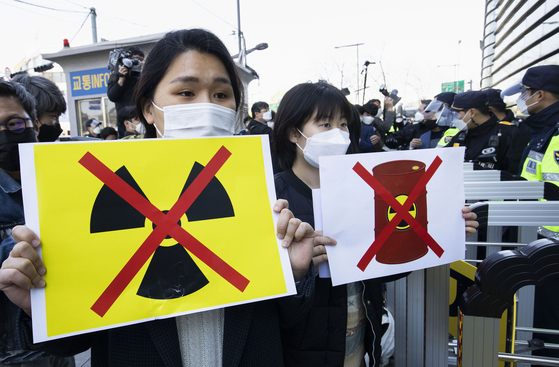 People protest against Japan's decision to dump radioactive wastewater from the crippled Fukushima Daiichi nuclear power plant into the Pacific Ocean outside Japanese embassy in Seoul on Wednesday. [XINHUA]

“The release of radioactive water is directly linked to the people’s health and safety as well as maritime contamination,” Busan Mayor Park Heong-joon said Wednesday. “The Busan Metropolitan Government will cooperate with the central government and international community to respond to the situation.”

South Gyeongsang Governor Kim Kyung-soo  posted a Facebook message demanding Japan reverse its “unilateral” decision. “We will never accept it. It is a crime against humanity and nature,” he wrote.

The city government of Pohang, North Gyeongsang, the largest sales hub of fisheries products on the East Coast, demanded that Japan reverse its decision.

Pohang and regional fisheries cooperatives jointly issued a statement, saying the radioactive water release will not only threaten the quality of Korea’s fisheries products but also harm consumers’ health.

The city’s economy is heavily dependent upon the fisheries industry. Its Jukdo Fish Market is the largest fisheries products market on the East Coast, and about 1 trillion won ($899 million) worth of products are traded there every year. About 5,000 Pohang residents are working in the fishing industry, while another 30,000 are working in related jobs such as sales, processing and restaurants.

Jeju Governor Won Hee-ryong already protested on Tuesday. According to the provincial government, Won already said he will file an international lawsuit to stop Japan from releasing the radioactive water.

Birth of a behemoth