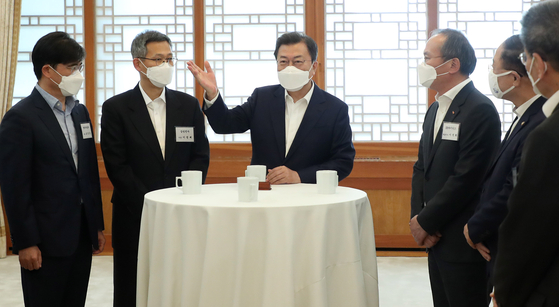 President Moon Jae-in stressed the need for evolution of Korea’s industries as the global economy changes after the Covid-19 pandemic.

“The global economy currently is undergoing a massive change,” Moon said during a meeting with CEOs of leading Korean companies including Samsung Electronics, Hyundai Motor and SK hynix and top government officials including Finance Minister Hong Nam-ki on Thursday.

It was the first meeting of its kind in more than a year. The last was in December 2019.

“Each and every country’s competitive drive to lead in the global market, which is recovering from the Covid-19 shock, is getting fiercer by the day,” Moon said. “Not only is there a transition to digital and low carbon economies, but there’s movement in trying to reorganize the global supply chain.”

Moon said Korea’s own key industries and new industries have both seen significant improvements in their competitiveness.

But he called for cooperation from both sides -- the private and public sectors -- not only to overcome the ongoing pandemic but to lead in the global market.

“The private sector and the government have to become one to overcome the ferocious waves of change,” Moon said. “The government, with the cooperation of the industrial community, will open a new era for our manufacturing industry.”

He said the government will come up with measures to encourage corporate investment and raise Korea’s export competitiveness.

Moon said he was satisfied with Korea's economic performance in the wake of the pandemic.

“Even this year, we are seeing a recovery that is faster than what we expected, centering on exports and investment,” Moon said. “The first quarter GDP has already recovered or almost recovered to the level of pre-Covid-19.”

Moon said he recognized that improving economic indicators do not necessarily translate to improvements for average Koreans.

“There are still many people whose incomes have not recovered from before Covid-19,” Moon said. “And the difficulties of people who have lost their jobs and young people seeking jobs and the self-employed whose business hours are restricted [due to social distancing regulations] continue.”

He said the government will focus its efforts not only on economic recovery but also of the average Korean’s situation.

Moon’s meeting came after U.S. President Joe Biden invited Samsung Electronics to a video conference in which he put pressure on the Korean company to take part in his administration’s $2 trillion infrastructure proposal.

During Monday’s meeting, Biden emphasized the strategic importance of semiconductors to the U.S.

"These chips, these wafers … batteries, broadband — it’s all infrastructure. We need to build the infrastructure of today and not repair the one of yesterday,” Biden said.

Samsung Electronics is considering expanding its semiconductor plant in Austin, Texas, but has yet to finalize a decision.

The Biden administration has also been credited in playing a key role to reconcile the two leading Korean battery companies – LG Energy Solution and SK Innovation – in a two-year patent dispute.

Both companies are planning new or expanded plants in the U.S.

The aggressive pressure from the U.S. has raised concerns over Korean companies’ investments at home.

Visiting a semiconductor lab on Wednesday, Trade, Industry and Energy Minister Sung Yun-mo said the government is looking at a special semiconductor law that would include government support measures including tax cuts on R&D and facilities investment.