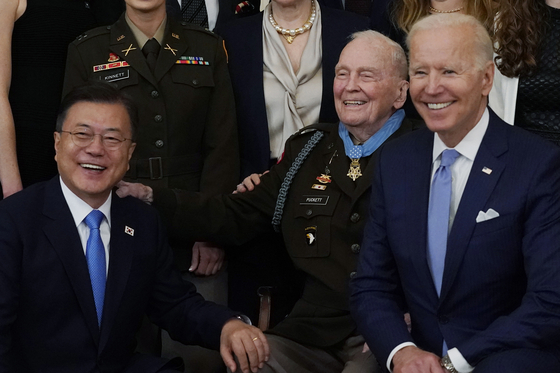 President Joe Biden, right, retired U.S. Army Col. Ralph Puckett, center, and President Moon Jae-in, pose for a photo after Puckett was presented the Medal of Honor at the White House on Friday. Moon was invited to the ceremony to award the highest U.S. military honor to the retired Army officer more than 70 years after leading soldiers through a fierce attack by Chinese forces during the Korean War. [AP]


Signs from the recent summit between President Moon Jae-in and U.S. President Joe Biden indicate that Seoul could become less neutral in the U.S.-China standoff and put more emphasis on its decades-long alliance with Washington.

Following their summit at the White House on Friday, Moon and Biden issued a joint statement that included several components that related to China without directly mentioning the country. A range of sensitive issues including escalated tension in the Taiwan Strait and Korea’s stand on the U.S.-led Quad security coalition against China were addressed in the statement.

It was evident that the Moon administration’s stance on joining the Quadrilateral Security Dialogue, or Quad, was evolving. In March, Vice Foreign Minister Choi Jong-kun said Korea did not want to join an exclusive regional coalition intended to keep a particular country in check. In the statement Friday, however, the two countries “acknowledge the importance of open, transparent, and inclusive regional multilateralism including the Quad.”

The joint statement went on to touch on even more sensitive issues.

“The United States and the Republic of Korea oppose all activities that undermine, destabilize, or threaten the rules-based international order and commit to maintaining an inclusive, free, and open Indo-Pacific,” it said. “We pledge to maintain peace and stability, lawful unimpeded commerce, and respect for international law, including freedom of navigation and overflight in the South China Sea and beyond.

“President Biden and President Moon emphasize the importance of preserving peace and stability in the Taiwan Strait,” it continued. “As democracies that value pluralism and individual liberty, we share our intent to promote human rights and rule of law issues, both at home and abroad.”

That position was reaffirmed when Moon took a question during a joint press conference. Asked if Biden had pushed him to take a tougher stance on China’s posture towards Taiwan, Moon said there was no pressure. “But, as for peace and stability in the Taiwan Strait, we agreed how important that region is, especially considering the special characteristics between China and Taiwan,” he continued. “We decided to work more closely on this matter going forward.”

China responded with fury. “We are expressing concerns about the joint statement,” Chinese Foreign Ministry spokesman Zhao Lijian said Monday during a press briefing. “The Taiwan issue is purely China’s domestic affairs. Other countries must speak and act carefully about the Taiwan issue. They must not play with fire.”

China's Ambassador to Korea, Xing Haiming, also complained about the joint statement. “There is no mention of China, but we do know that it was targeting China,” he said. 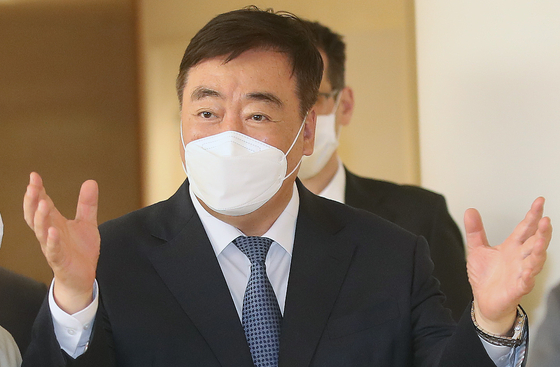 He said Moon and Biden intervened in China’s internal affairs by mentioning the Taiwan issue. He also complained that the joint statement addressed other issues concerning China such as the South China Sea and Quad.

A senior Blue House official said Monday that Seoul has maintained communication with Beijing on Moon’s visit to Washington. “Although the Taiwan Strait issue was included in the joint statement for the first time, it just stated a basic principle that regional stability is also important to us,” he said.

He said China and the United States have both shown understanding over Korea’s complicated situation.

Earlier in the morning, Vice Foreign Minister Choi also said China would actually appreciate that Korea did not specifically mention it in the joint statement. “The joint statement between the leaders of Japan and the United States had a more explicit mention of China,” Choi said in an interview with TBS radio.

Analysts said the joint statement was a surprise.

“It included so much content that practically opened a new chapter in the history of the Korea-U.S. alliance,” said Wi Sung-lac, a former senior diplomat who served as the special representative for the Korean Peninsula peace and security affairs. “It was also very strange, because there was an extraordinary shift in the Moon administration’s long-held position [between the U.S. and China].”

Wi said the joint statement included everything that the Moon administration has tried to avoid in talks with the United States over the past four years, including Taiwan. “There is no mention of participating in the Quad, but the joint statement shows that Korea now has no reason to not join it,” he said.

Moon and Biden also agreed to terminate missile guidelines that have restricted Korea’s missile activities since 1979. With the termination of the Revised Missile Guidelines, Korea will no longer be restrained by payload, fuel-type or range limits. Under the latest guidelines, Korea was restricted to develop and operate ballistic missiles with the range of 800 kilometers.

The lifting will allow Korea to develop intermediate-range ballistic missiles capable of reaching targets beyond North Korea. China, Japan and Russia will be within range if Korea upgrades its missiles. The military already developed Hyunmoo missiles with an 800-kilometer-range with a payload of 2 tons. By reducing the payload, the range can easily be increased to up to 2,000 kilometers -- enough to reach inland China.

“Termination of the missile guidelines is very significant,” Yoo Jeh-seung, a former deputy defense minister who is currently serving as the vice head of the Korea National Strategy Institute, told the JoongAng Ilbo. “When the range is limited to 800 kilometers, out missiles are intended to deter the North’s threats. But if we have missiles with longer ranges, we will have the power to deter neighbors’ threats.”

Moon and Biden also agreed that the two countries will “develop cooperation in overseas nuclear markets, including joint participation in nuclear power plant projects, while ensuring the highest standards of international nuclear safety, security, and nonproliferation are maintained.”

That can be seen as a strengthening of the two countries’ competitiveness against China, Russia and France in the nuclear plant markets. According to industry sources, the Czech Republic, Poland, U.K. and Saudi Arabia are planning to build new plants in coming years.

In  recent years, China has won nuclear plant projects in countries such as Pakistan, Argentina and Turkey. Korea has won no project since a deal in the United Arab Emirates in 2009.

“The agreement is to keep China and Russia in check as they are strengthening their partnership in the global nuclear plant market,” Chung Bum-jin, a professor of nuclear engineering at Kyung Hee University, told the JoongAng Ilbo. “If more nuclear plants by China and Russia are built around the world, it will be hard to keep track of the amounts of uranium being used and the U.S. control over nuclear energy will be weakened.”

Other economic cooperation agreements such as vaccine manufacturing, semiconductors, batteries and 6G networks also signal that Korea is joining the U.S. side in the technology war between the United States and China.