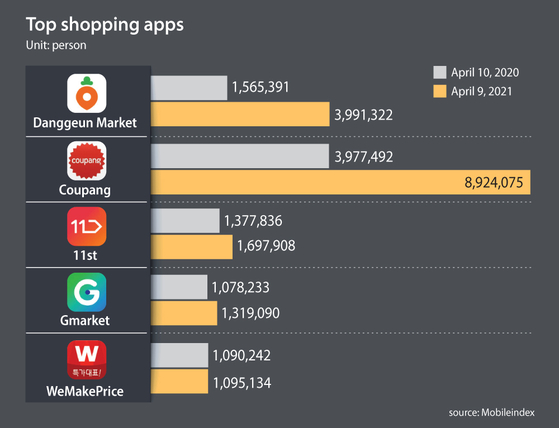 Hong Suh-ho, 32, an office worker for a big company in Seoul, is a heavy user of Danggeun Market, probably the easiest way to buy or sell something second-hand.

Hong first tried the app to find tickets for a K-pop concert – it also functions as a digital scalper. Now he uses the app to maintain a minimalist lifestyle. In other words, as soon as he tires of something, he sells it through Danggeun Market, from 700 won ($0.63) Starbucks e-frequency rewards to home appliances. He does arbitrage too on big ticket items like luxury handbags worth hundreds of thousands of won, for the sake of profit. Hong’s transactions on the app now exceed 10 million won.

“It’s a win-win situation because I earn money by selling things I don’t need and other people can get what they want,” said Hong.

Kim Dong-ju, 37, an avid second-hand seller for the past decade, always keeps receipts and the original packaging for whatever he buys. He has learned that second-hand buyers want to enjoy the experience of opening a boxed item – and will pay more for the thrill.

“After using the new Nintendo for about a month, I decided to sell it because I didn’t want it anymore,” said Kim. “Even though I quoted a higher price than the original, a lot of people still wanted to buy it.”

The second-hand market is enjoying dramatic growth, with people in their 20s and 30s out in front and technology playing a major part.

The MZ generation – a Korean term referring to millennials and Generation Z that includes people born between the 1980s and 2010s –  accounts for some 60 percent of second-hand marketplace platform users. Joonggonara and Bungaejangter are big players in the second-hand sector, with Danggeun Market recently rising in popularity.

According to a poll by GoodRich, an insurance management agency that recently released a report on investment and spending habits of young Koreans, 83 percent of 1,000 people in their 20s and 30s surveyed said they have bought or sold second-hand items in the past year. Some 27 percent said they have done it more than six times.

The MZ generation – who are either students or entry-level workers – have low spending power. Shopping savvy is particularly important to them.

In a survey of 2,233 MZers by part-time job hiring platform Albamon, 51.2 percent said they prioritize gasungbi, a Korean term referring to a product with good quality for its price. Slightly over 37 percent replied they prioritize gasimbi, another Korean term describing psychological value for money – that they do not mind a high price if the product brings them happiness.


This unique consumption sensibility of the MZ generation has propelled the second-hand market, particularly for luxury goods such as designer bags and shoes.

According to Mobileindex, a research firm specializing in mobile industry data, nearly 60 percent of people who sold and bought luxury items between September and November last year were in their 20s and 30s. Including people in their 40s, the number rises to 84 percent.

Many younger Koreans believe that old dreams like having a family or owning a residence are beyond them. For that group in particular, second-hand luxuries are a source of fulfillment.

The MZ generation values experience over ownership, making them go wild for limited edition items. With rare items reselling for a higher price, selling Chanel handbags and limited edition shoes has become a satisfying way of enjoying a little profit on the side by younger Koreans.

Young Koreans’ ideas about second-hand goods are also different from previous generations. The MZ generation considers second-hand goods and used hand-me-downs as two entirely different concepts. There's nothing embarrassing about the first. In fact, it's a fun way of getting one's hands on unaffordable objects of desire.

Celebrities such as RM of BTS are known to sell and buy second-hand items, so trading pre-owned goods has become trendy.

Seoul National University’s Consumer Trend Center mentions “Nth item” as one of the keywords of the year. The term refers to the phenomenon in which a limited edition product is valued regardless of how many people have owned it in the past.

“Those clothes are low quality, they can’t be worn for a long time, nor be resold,” said Shin. “If I resell luxury brand clothes, the cost to me is not much different from buying cheap clothing.”

The secondsumer trend, a mashup of the words “second” and “consumer,” refers to consumers who are most interested in sustainable living, and whose buying habits revolve around that.

According to Daehak Naeil 20’s Lab, purchasing second-hand items is an act of precycling for the younger generation, a way of minimizing their consumption. They recycle, buy "upcycled" items, and feel the need to reduce waste even before purchasing new products.

In the survey by GoodRich, 50 percent of the respondents said that second-hand trading is frugal and 25.6 percent said it can protect the environment.

The size of Korea’s second-hand market is 20 trillion won, up sharply from 4 trillion won in 2008. This is on par with total transactions last year on local e-commerce leader Coupang, which were 21 trillion won. Danggeun Market had 156,000 daily active users (DAU) as of last April, second only to Coupang’s DAU of 397,000.

"Brought up in a prosperous economy, the MZ generation has a desire to own various items but had to turn to second-hand shopping because they lack the money to buy everything,” said Lee Eun-hee, a professor in Inha University’s Department of Consumer Science. “On top of being able to buy what they want, the satisfaction of protecting the environment by precycling and creating a righteous society makes them value buying pre-owned goods.”