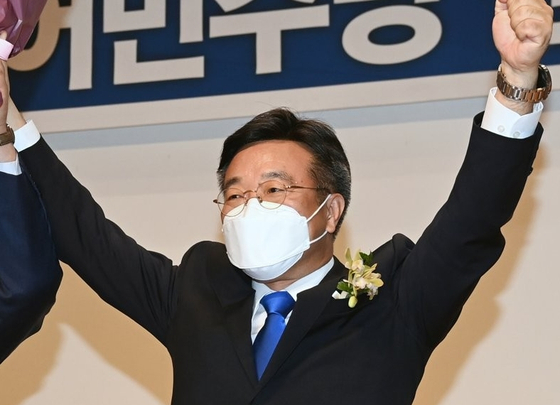 Rep. Yun Ho-jung of the Democratic Party is elected Friday as the new floor leader. [YONHAP]

Yun, a four-term lawmaker, has been serving as chairman of the Legislation and Judiciary Committee of the National Assembly since June 2020. The 58-year-old lawmaker was backed by allies of Moon in the floor leader race.

Yun ran against Rep. Park Wan-joo, a three-term lawmaker whose allies are former student activists. He once headed a fraternity of reformist DP lawmakers.

Until the DP elects a new chairman on May 2, Yun will oversee the party as its acting head. Members of the DP leadership stepped down last week to take responsibility for the party's defeats in April 7 by-elections, including mayoral races in Seoul and Busan .

Yun will resign as chairman of the Legislation and Judiciary Committee. The the main opposition People Power Party (PPP) has been demanding that one of its lawmakers serve in the post. It remains to be seen if the DP will accept its demand.