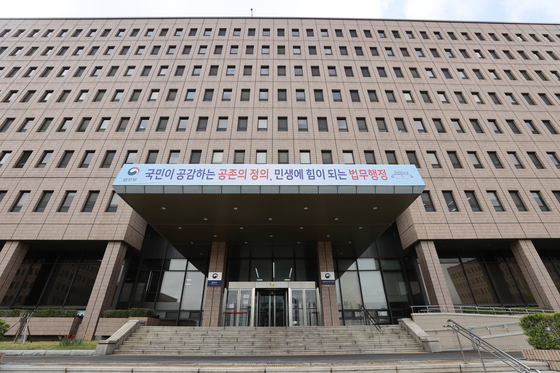 The Ministry of Justice headquarters in Gwacheon, Gyeonggi, on Friday. [YONHAP]

Covid-19 has penetrated the Ministry of Justice and National Assembly.

A worker at the Ministry of Justice headquarters in Gwacheon, Gyeonggi, tested positive on Friday.

The ministry said it shut down one floor of the headquarters immediately and asked everyone working there to be tested and stay at home until they get their results. The ministry shut down that floor, and in a few hours decided to shut all offices in the building occupied by the ministry.

That included the office of Park Beom-kye, the minister of justice.

At the National Assembly, Democratic Party Rep. Lee Kai-ho tested positive on Thursday, becoming the first sitting lawmaker to do so.

Lee’s secretary tested positive on Wednesday. All staffers in his office have been asked to get tested. Health authorities are trying to track down people who came in contact with Lee and his staff, including those who attended a wedding on Sunday in Gwangju, which Lee was at.

Lee also attended a funeral in Gwangju on Tuesday. 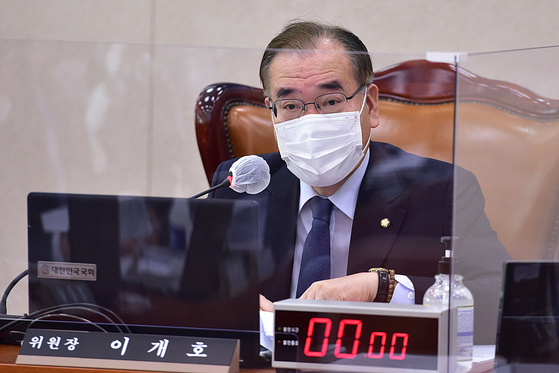 Korea’s daily Covid-19 cases have seen a spike recently, jumping into the 700s last week. They remained in the 300s and 400s for most of March.

Korea will not be raising its social distancing measures immediately, said the Ministry of Health and Welfare on Friday.

“The rate of increase in cases is not dramatic at this point,” said Yoon Tae-ho, a director of disease prevention at the Ministry of Health and Welfare in a press briefing Friday. “The health authorities are analyzing the number of available beds in hospitals, the number of patients in critical condition, as well as the rate of vaccination among the population at higher risk, to decide if the social distancing level should be adjusted.”

Korea runs a five-tier social distancing system, of Levels 1, 1.5, 2, 2.5 and 3. The greater Seoul area – Seoul, Incheon and Gyeonggi – will remain at Level-2 through May 2, with bars that allow dancing and night clubs not allowed to operate at all. Noraebang (singing rooms), gyms, saunas, restaurants and cafes and theaters must close by 10 p.m.

On Thursday, Korea added 673 new cases, of which 21 were imported. Of the local cases, 215 were based in Seoul, and another 216 in Gyeonggi.

Although Korea intended to reach herd immunity by November, it is facing setbacks in its vaccination program after a pause in administration of Janssen vaccines in the United States and uncertainties over the deliveries of Moderna vaccines.

Earlier in the week, the government announced it had arranged vaccines from Novavax, which are produced by SK Bioscience. But they will only come in the third quarter of the year -- they were expected in the second -- and will only be 20 million doses, half as many as expected.

This means that through the end of June, Korea has to rely on vaccines from two companies: AstraZeneca and Pfizer.

The various glitches may prevent the government from reaching its goal of getting first shots in 12 million people, or 23 percent of the population by the end of June, and achieving collective immunity by November.

As of Wednesday, just 2.5 percent of the Korea’s population had received at least one dose of a Covid-19 vaccine, which was significantly smaller than 37 percent in the United States and 47.6 percent in Britain, according to Our World in Data, a non-profit organization based in Britain that provides statistics on Covid-19 infections in partnership with researchers at the University of Oxford.

To augment the vaccination programs, the Korean government announced Thursday that it will allow local manufacture of a foreign producer’s Covid-19 vaccines starting in August.

It didn’t specify the names of the vaccine or the pharmaceutical company.

The announcement left many puzzled, with some netizens guessing it could be Russia’s Sputnik V Covid-19 vaccine.

“Our announcement yesterday has nothing to do with Russia’s Sputnik V,” Sohn Young-rae, a high-ranking official from Korea’s Ministry of Health and Welfare, told the press on Friday. “With a number of uncertainties on vaccination programs around the world, Korea decided to increase local production of vaccines from abroad, and is also focusing on ensuring imports of vaccines.”

In addition, Hankook Korus' parent firm GL Rapha made an agreement to produce Russia’s Sputnik V, and GC Pharma will import and distribute Moderna. Regarding the Janssen shots, which were suspended in the U.S. after reports of rare blood clots, health authorities reiterated that they have not changed plans to buy the vaccine.

Covid peak is over, says gov't, as rules to be relaxed